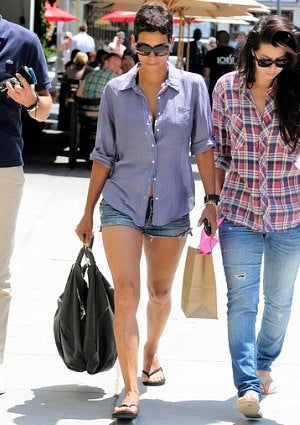 With films like “Princess and the Frog,” “Toy Story,” “Shrek” and the “Despicable Me” dominating box offices it’s safe to say that animation has made its comeback. It’s no wonder that our long-time favorite animated series are pulling in big names like Halle Berry. Berry is set to play herself on an upcoming episode of “The Simpsons,” the show’s executive producer Al Jean told EW.com. In this installment — which will air in 2011 — the Oscar-winning actress is a presenter at the Academy Awards, where Bart and Homer are nominees for an animated short based on Bart’s webseries “Angry Dad.” “It’s a bit of satire of the different Oscar acceptances where two people clearly race to the stage to get there first,” Jean told EW, “and Homer and Bart are fighting to be the one that accepts.” That reminds us of the Roger Ross Williams-Elinor Burkett scrap over the trophy for the documentary short “Music By Prudence” at the 2010 Academy Awards. Which superstar would you like to see get animated?