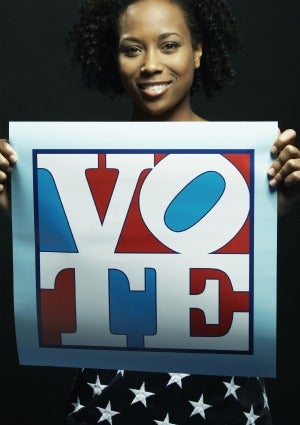 They say that time changes things, and in terms of political polling, the expression is spot-on. A month ago, the accepted narrative was that Democratic voters–particularly the African-American voting bloc–were dejected, disillusioned by President Obama and definitely not coming out for midterm elections. Republicans, meanwhile, were poised to take over the House and Senate in a Tea Party-fueled blaze of glory. That was then. Today, the landscape is shifting and the enthusiasm gap is narrowing. According to a recent Newsweek poll, the President’s approval rating has climbed to 54 percent, up from 48 percent in late September. At battleground-state campaign rallies this month, Obama has drawn massive crowds as large as 35,000, while a national Tea Party convention was cancelled due to lack of interest. The shift is due in no small part to African-Americans. “Over the past couple of months, the percentage of African-Americans paying close attention to midterm races has increased by double digits,” says Democratic pollster Cornell Belcher, who expects a solid turnout on November 2. Yet more important are the unconventional surge voters who came out for Obama two years ago. “We had a huge surge of younger African-Americans, and if that surge comes back they throw a big wrench in all the predictions,” says Belcher. “Can we get them to come out again? That’s the million dollar question.” What’s At Stake Here? In a conference call Tuesday night with African-American community leaders including civil rights activists the Reverend Joseph Lowery and Reverend Al Sharpton, President Obama paraphrased Massachusetts Governor Deval Patrick. “In 2008 we changed the guard, but in 2010 we need to guard the change,” he said, adding that the Republicans have been explicit about their intentions to reverse his gains of the past two years. Senate Minority Leader Mitch McConnell confirmed that goal, saying in a recent National Review interview, “The single most important thing we want to achieve is for President Obama to be a one-term president.” More specifically, Republicans have vowed, if they take over either house of Congress, to repeal the health care reform law — which would overturn coverage for people with pre-existing conditions, reinstate lifetime caps on health insurance, and reverse free preventative care. They have obstructed tax relief for the middle class in their fight to extend Bush’s tax breaks for millionaires and billionaires. The GOP also promises to roll back on financial regulatory reform, to reverse bans on deceitful credit card rate hikes and misleading, inflated mortgages. Much More to Do White House Senior Advisor Valerie Jarrett similarly underscored the importance of maintaining the progress that’s been made, while also stressing that Democrats have more work ahead. On the nation’s most pressing issue, the economy, she acknowledged the alarming 16 percent Black unemployment rate. “The unemployment rate is much too high in the African-American community,” she said in a conference call with reporters, but continued, “Had it not been for the steps the President took, it would be even higher.” Jarrett reminded participants that, in the final six months of the Bush administration, the country lost 4 million jobs. Conversely, over the past nine months we’ve seen steady private sector job growth. She further touted President Obama’s tax cuts for 95 percent of working Americans, and 3 million jobs saved or created under the Recovery Act. “We’re not nearly where we want to be, but it’s in the right direction,” she said. The Power of Your Vote In the 2008 presidential election, Black voters played a crucial role in helping propel Obama into office. “For the first time in history, African-Americans outnumbered Whites in terms of the percentage of people who voted,” says political strategist Donna Brazile, adding that history could be made again on November 2 if our community turns out in significant numbers. While Democrats are very likely to lose seats — the historical norm for any incumbent party — Black voters can make the difference in races that are nail bitingly close. A report by the Joint Center for Political and Economic Studies shows that, because African-Americans are located in many battleground states and districts, several contests (20 House seats and 14 Senate seats) could potentially be determined by our voting power. “Younger brothers and sisters are incredibly civically minded and engaged,” says Belcher of the hard-to-reach surge voters. “However, up until Barack Obama they had not found politics as a viable vehicle for changing their community. The challenge is getting this group to understand that Barack Obama needs them to continue the change — which means voting for Democrats they hadn’t previously voted for.” In the midst of a harsh economic climate, when so many people are preoccupied looking for jobs, voting on November 2 may be even less of a priority. But Jarrett argues much is at stake. “Regardless of whether President Obama’s name is on the ballot, his policies and his vision for our country are,” she said. “That’s why it’s so important to come out to vote.” For more of Cynthia Gordy‘s Obama Watch stories, click here.