After committing a two-decade killing spree of Black women in the Los Angeles area, Lonnie Franklin, Jr. aka The Grim Sleeper was sentenced to death on Tuesday. Previously, he was found guilty of 10 murders, though some speculate that he may have killed many more, possibly 180 Black women between 1985 and 2007.

Franklin’s sentencing gives some semblance of justice to the families of the women he murdered. It also closes another beyond unfortunate chapter in the history of the Los Angeles Police Department, which is perpetually marred in controversy. This time, the screw up was that after the murders of several Black women under similar circumstances in the mid ’80s, the LAPD failed to warn the South Central Los Angeles community where the murders took place that a serial killer was on the loose. The department remained silent, even after forming a secret six-man task force to investigate the murders in 2007, 22 years after the murders began. The community only learned of a suspected serial killer when LA Weekly published an investigative article revealing the task force, and thus the serial killer’s existence.

The big question has always been “why didn’t the LAPD say anything?”, to which the department has never given a sufficient explanation. But if you’re one of the people who believes actions say more than words, then the answer is obvious: they did not care.

In 2010, 25 years after Franklin started his killing spree, he was arrested and charged with the murders of ten women. During the investigation, police found hundreds of images of black girls and women in his home, most nude or in a state of undress. The common thread between nearly all of the women in the pictures and also his victims were they were poor black women, many of whom had drug addictions and/or were prostitutes.

In a 2014 HBO documentary, Tales of the Grim Sleeper, Franklin’s friends say he was known for his disdain for women with addictions. Despite getting sexual fulfillment from these women, Franklin saw them as worthless and disposable because his first wife was allegedly an addict. I would also guess that Franklin, much like Daniel Holtzclaw, who was recently convicted for raping 13 women in a poor, predominantly African-American neighborhood in Oklahoma City, chose his victims because he thought that outside of other Black women and the women’s relatives that many people thought about poor Black women in much the same way he did.

And he was right. When tens of women started missing left and right in South Central Los Angeles, there was no Missing White Woman Syndrome, a term academics and cultural critics coined to describe the cultural hysteria when just one white woman such as Natalee Hathaway, Laci Peterson or Elizabeth Smart couldn’t be found. There was no news coverage about the mounting pile of dead black female bodies all killed with a .25 pistol and discarded in alleys. There was not even a press release.

But why not? The same documentary also includes an interview with Franklin’s son, Christopher, who shares a story of his run-ins with the LAPD after his father was arrested and charged with the murders of multiple Black women. He says the officers weren’t hostile; they were in awe. They spoke of his father as though he was a hero for cleaning up the streets by murdering prostitutes and/ or drug addicts. 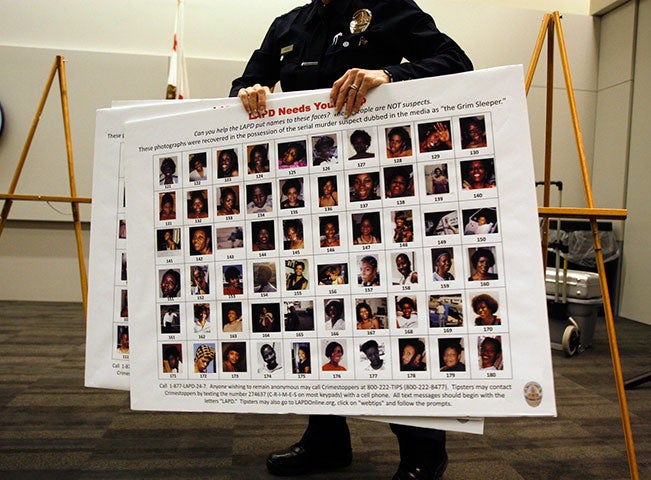 And worse, the women who encountered Franklin and were able to escape his clutches, knew the police felt this way about them too. The documentary includes several women who “dated” Franklin, including a woman who bolted from his house naked in fear of her life. Each time the interviewer asked, “Why didn’t you go to the police?”, the answer was about the same: the women knew what society thought of them as women who were addicted to drugs and selling their bodies. They didn’t think the police would believe their stories, or if they did, officers would not care if anything happened to them. Sadly, they were right too.

There’s not much question as to whether the LAPD failed the murdered women, their families and the community. LA Weekly did a long expose about that. But after watching Tales of the Grim Sleeper again, it’s evident that there is another group that failed these women and somehow has slipped under the figurative radar: black men.

Franklin has two best friends who appear throughout the documentary. Both initially claimed Franklin was a good guy, but then each circled back separately to talk about strange behavior by Franklin that they turned a blind eye to. There’s the best friend who bonded with Franklin mostly over trading pictures of naked women on their women on their cell phones. These two very grown men at least in their 40s, including Franklin who was married and a father, would compete to see who could get a woman to do the nastiest things and be photographed. The friend said “girls” were their hobby, as if people are a sports genre like basketball or soccer.

Another friend and neighbor was a carpet cleaner by trade. He routinely cleaned the soundproof RV were it’s believed Franklin murdered some of his victims. He’s the same friend that describes seeing Franklin approach a woman in the street and begin beating her. He says he asked Franklin why he was beating her, but never said, “hey stop” or the like. He didn’t really want to get involved in another man’s relationship.

Another friend says he would do “insurance jobs” for Franklin, by which he meant set cars on fire for insurance money. On one of the occasions, the man found large pools of blood in a car. He said nothing and set the car on fire anyway because, well, it wasn’t his business and he needed the money to buy drugs. Finally, there’s another man who used to accompany Franklin when they would go out to “get women”. He would watch Franklin torture the women with bottles (use your imagination) and the women would cry, but he wasn’t really bothered by it, he said, because he was smoking crack. (Franklin had no issue with men who used drugs, only women.) And yes, the man acknowledged, it was bad that the women were being tortured, but it’s not like Franklin was killing them, at least not in front of him.

Franklin’s friends are like caricatures of the casual and familiar strain of a twisted Man Code that so many men so often participate in. There are many men that think nothing of using women for sex and discarding them after. That’s just being a player, right? And a player is a good thing. They hold double standards for women, like it’s fine if men mess up and being forgiven is an expectation, but a woman is expected to be better than them, and if she falls short, she’s worth less. Check your boy for beating a woman? For what? That’s his personal business. Ask obvious questions about suspect behavior? Nah. No reason. Just nah. That’s not what men do. Hold another man accountable? Accountability is reserved for women.

Franklin’s friends were never charged in connection with his crimes— not even the three who seemed to actively cover up his murderers. However, their popular and horrible perspective on women and our collective culture’s devalued perception of black women are as much responsible for the deaths of Franklin’s victims as the LAPD’s negligence and Franklin himself.

Demetria Lucas D’Oyley is the author of Don’t Waste Your Pretty: The Go-to Guide for Making Smarter Decisions in Life & Love. Follow her on Twitter and Instagram.