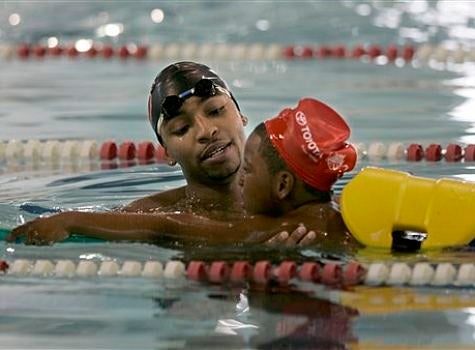 The USA Swimming Foundation now estimates that nearly 70% of Black children do not know how to swim, with Hispanic children trailing near behind at 68%. The foundation has teamed up with Olympic gold medalist Cullen Jones for year two of the “Make a Splash” initiative to help more Black children learn how to swim. Jones spoke with ESSENCE.com about how he nearly drowned as child and the importance of learning how to swim, especially since summer is around the corner. ESSENCE.com: What made you join this initiative? CULLEN JONES: Right after the Olympics my agent would always tell me there was so much I could do with sports and i never knew what he meant. USA Swimming approached me about being their initiative. I read some of the statistics they had from the University of Memphis and was just astonished at the drowning rates for African-Americans — we’re three times more likely to drown than Caucasians. It’s something that I’d like to change, especially since I nearly drowned myself when I was five years old. ESSENCE.com: You nearly drowned? JONES: I say to kids: ‘You see I have a gold medal and I’ve been swimming for 17 years, do think that I almost drowned?’ And all of them say, ‘No, no.’ When I was five my parents and I were at an amusement park. I was on this ride and I was meant to hit the deep end and float. That’s not what happened. I hit the water and flipped upside down and I was under water, people couldn’t hear me, no one knew. A lot of people see the stereotypical yelling and screaming and then someone dives in and get them. [Drowning] is a very quiet situation. My dad turned around and the lifeguard saw me just in time. ESSENCE.com: Why do you think we don’t make swimming a priority? JONES: One of things we’re seeing with this initiative is that it’s really generational. Parents don’t necessarily know how to swim themselves and just don’t see it as an important thing to be able to swim, but they’ll say, ‘Hey, its summertime, go to the pool.’ A large part of the problem is that kids are saying that they know how to swim and when we start telling them the specifications, more and more are like, ‘No, we can’t do that.’ ESSENCE.com: How are you reaching out? Are you going to city pools? JONES: We’ve been doing city tours. Last year it was Kansas City, Denver and Houston, this year it’s New York, Los Angeles and Chicago. We’re getting public officials and local partners — we now have 215 partners in 41 different cities. Really, what we’re trying to do is give parents a resource to get children into swimming. What we didn’t want to happen is for me to come in with the gold medal, show the kids, the get excited, go home, and everything just fizzles out. With these local partners can say, ‘Do you really want to do this?’ We’re giving you a way to do it. ESSENCE.com: What are you get out of it? JONES: The funny thing is I went to school for Psychology and English and I would have never thought I’d be doing the same job at 26 that I was in high school. I used to teach children how to swim. Now knowing the statistics, I definitely get a lot of joy from knowing that I’m helping to save a life. Parents can log on to makeasplash.org to find locals partner offering free or low-cost children’s swimming lessons.