In April of 2016, the formerly incarcerated activist launched the #CLOSErikers campaign—a movement mandating New York City Mayor Bill de Blasio, shutter the city’s main jail complex. But even in the aftermath of de Blasio’s pledge to cease operations at the notorious prison within 10 years, Martin’s persistent fight for its closure continues.

This is the message Martin and fellow #CLOSErikers advocates are moving forward with this week. For the Brooklyn native, de Blasio’s announcement was seen as a good start, but not enough to appease him and other prison reform activists who have made it their mission to bring about real change.

“I give him credit for finally coming around to our point of view, but if he doesn’t engage in action soon, he’s going to realize that the campaign is going to continue to be relentless,” Martin told ESSENCE.

Proof of this came less than a month after the astonishing announcement was made. On April 24, Martin, through his advocacy group JustLeadershipUSA (JLUSA), gathered over 400 protestors on the steps of City Hall to demonstrate their commitment to the movement.

For a year prior to that, JLUSA — where Martin serves as president and founder — challenged the mayor’s plan to rehabilitate the tarnished prison complex. With newsletters, marches, pop-up visits, social media campaigns, and a commercial, the organization was able to highlight that the problem with Rikers is not simply the building, but the system that has manifested since its inception in 1932.

“Rikers Island is a piece of land that was purchased from the Ryken family who used to capture slaves and return them to the south. Rikers has emerged to represent everything that’s wrong with the criminal justice system in the United States. It’s unfair. It’s unjust. It’s not safe, and it doesn’t produce safety or justice for anyone— victims or detainees,” Martin explained. 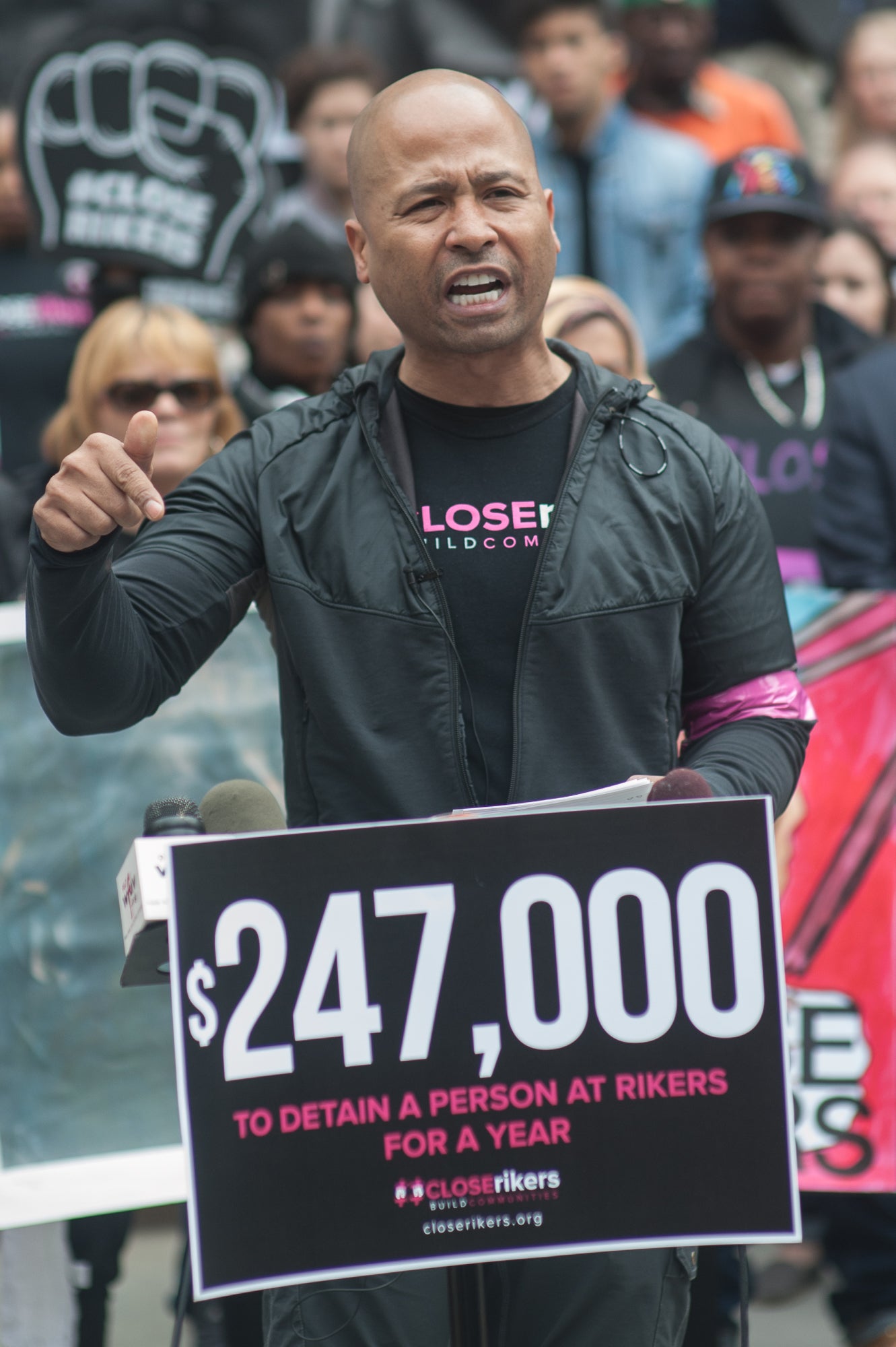 Issues plaguing the building have garnered significant attention in recent months, thanks in part to documentaries like Ava DuVernay’s 13TH, Bill Moyers’ Rikers: An American Jail, and Time: The Kalief Browder Story, executive produced by Harvey Weinstein and Shawn “Jay-Z” Carter. What was once a problem well known to the residents of New York City now has national appeal and a platform that lends itself to greater scrutiny.

The island’s introduction to popular culture has also benefited the #CLOSErikers campaign in its ability to allow people to not simply hear, but to actually see the steady flow of human carnage that exists at the complex. Martin ascertains, “the reason we didn’t have traction on Rikers in the past is that every time people heard about folks getting hurt or killed at Rikers, for them, it felt the same way as listening to the evening news about someone getting hurt or killed in Syria.”

Now, with a greater lens on the injustices happening in this particular prison system, Martin hopes that change can be brought to prison systems around the country. His belief is that “Rikers is every jail, and every jail is Rikers.” While the NYC complex has unique issues, such as its location and disturbingly high representation of Black and brown men – nearly 90 percent according to the Department of Corrections – it stands as an illustration for a larger social justice matter. The over indexing of people of color, the exorbitant amount of money being spent on infrastructure opposed to rehabilitation, and the concerning number of people who are in prison without a conviction, are a common thread throughout the nation.

To the delight of reform activists, people are starting to pay attention.

“Essentially, what people are responding to is the ability to now imagine something different. I think that people had to see a place like Rikers on its way out to believe that they could achieve similar reforms in their jurisdictions,” Martin asserted.

Although #CLOSErikers started out as a response to the stabbing of a 16-year-old inmate on the infamous island, Martin is painfully aware that cities like Detroit, Chicago, L.A,. and Philadelphia can all benefit from a similar crusade. Martin clarified that the movement in New York is less about shuttering the facility, but more so about reimagining the criminal justice system as a whole.

“I do think what will happen is that people will use this as a model, not just to close down jails and prisons, but to do what we did which is to get a commitment to actually cut the population in half.”

Beyond its current campaign, JLUSA wishes to cut the current prison population in half by 2030 (#Halfby2030). Martin trusts that this will happen through a number of reforms that include improving the way bail is handled and modifying the statutes on a speedy trial.

There’s a long road ahead before this happens, but JLUSA has managed to engage over 260 leaders in 27 states around the country to help drive the national undertaking. The organization plans to use the techniques from their NYC efforts to help other advocates galvanize their own campaign.

For anybody who doubts that nationwide reform to the prison system can transpire, Martin has a message for you:

“It’s not just whether this is going to happen. We’re going to make it happen.”