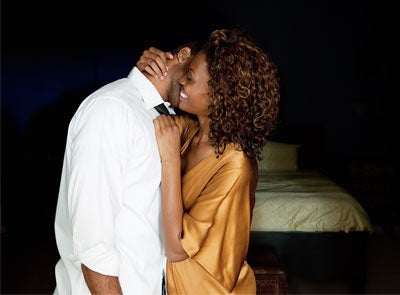 Sisters, I have a modest proposal for you today. It’s the holiday weekend (and it’s “Frisky Friday” around these parts), so surely some of you have some sexy time penciled in between your beach and barbeque plans. All that I ask is that you never “give” a man “some” ever again.

Seriously. No more “giving it up”. What do you think? Too difficult a request? I seriously disagree and I think you can honor it. You see, I’m not asking you to stop having sex. I’d never, EVER ask you to do such a thing. But I would like to see women (and men) get rid of the language that suggests that sex is something that we give and men take. It inhibits our ability to be free and equal partners when it comes to the business of the boudoir and it needs to go.

Sex isn’t a thing that you clutch tightly between your legs, waiting for some prince to be worthy of your virtuous vaginal treasures. It is an experience to be shared between two consenting people who respect one another and value each other’s time and pleasure.  The “give him some” concept implies that one is either holding back her own sexual desires in order to be appropriate or relenting and allowing her body to be a vessel for someone else’s pleasure without considering her own.

I’m not suggesting that a woman is wrong for giving careful consideration as to whom and when she participates in the act of sex; some of us are more casual with our carnal behavior, while others take the act more seriously. You do whatever works for you. However, by continuing to see sex as “give” as opposed to “share”, it becomes less of a mutual experience and more of a task or a gift. Your sex isn’t just for him…it’s for YOU!

When lamenting the proper time to twist the sheets with a new partner, you shouldn’t worry over “giving it up”, but instead, decide with him when would be the best time for you both to SHARE the experience of making love. If you find that you need more time then he may want, the date of the first sex still shouldn’t be regarded as “giving it up”; instead, it’s when you were ready to do something together as a couple.

As the sangria flows and the summer nights cast their spell, the temptation to get busy may very well find you pondering your options. Be sure to remember that your sex and sexuality as something special that you share when you feel comfortable doing so, be that sooner or later, with a boyfriend or with a weekend fling. But sex is too wonderful for you to “give up”…keep it for yourself and chose to share instead.

The Jordan Brand Announces 20 Year Partnership with Howard U...

Bridal Bliss: Natasha And Michael's Wedding Was The 'Bashmen...