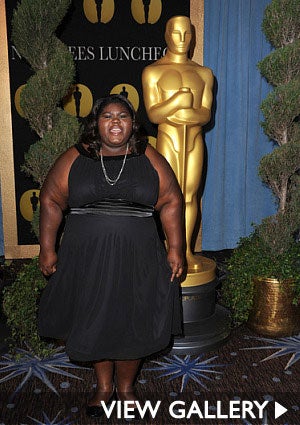 So what if Vanity Fair didn’t include her on it’s “New Hollywood” cover? Oscar-nominated actress Gabby Sidibe is thankful for the positive attention she is getting–even the interview inside the issue. “I come from a world where I’m not on covers and I’m not in magazines at all, and so I was happy to be in the magazine,” she told Access Hollywood. “At first I thought, ‘Hmm, should I be there?’ Then I very quickly got over it. I think if I were a part of that shoot I would have felt a little left out anyway.” On finally developing a positive self-image, Gabby said: “It was a long transition…I’m just grateful that I am there because so many people go through this–beautiful people, gorgeous people–don’t feel it, don’t feel as if they’re gorgeous and I think it’s really sad and I’m glad that I happen to be one of the people who does feel [it].” Meanwhile the Harlem native has been chosen as one of The New York Times Magazine’s “Five Breakout Stars of 2009.” So too, actress Zoe Saldana for her work in “Avatar.” Read More: