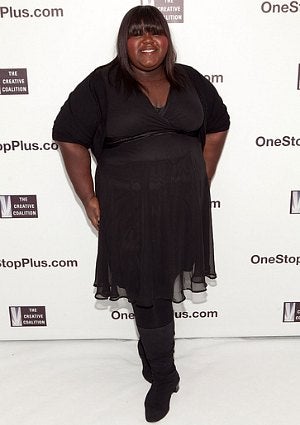 The naysayers may have their opinions, but Gabourey Sidibe’s mother, Alice Tan Ridley, isn’t entertaining any negative talk surrounding her daughter’s “Elle” Magazine cover. The sassy singer and “America’s Got Talent” finalist is just happy to see her daughter on the cover. “My daughter looks beautiful — that’s all that matters,” she told RadarOnline. Commentators have accused “Elle” of lightening Gabby’s skin on the cover. Even ESSENCE.com blogger Dr. Janet Taylor weighed-in on the debate, saying “the implication is that her skin color is flawed, too dark, needs a retouch or whatever imposed standard of beauty a few decided. How dare they?” But Ridley thinks we should be looking at the bigger picture. “Look, there aren’t that many Black women who get on the cover of “Elle,” so, I’m really proud of my daughter because she is breaking down some doors there.” Ridley also thought it a big move for “Elle” to put a plus-size woman on its cover. “Gabby is acting as a good role model for normal and fuller-shaped women and that is great too — no matter the color of their skin.” What do you think?