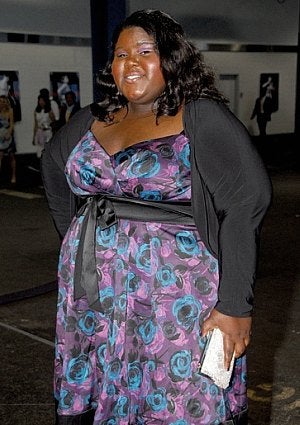 It’s nice to know that stardom hasn’t changed Gabourey Sidibe too much. She’s still a fun-loving, boy-crazy 27-year-old. The “Precious” star recently revealed to People that she likes “smart men with grown-up jobs who share my unusual sense of humor.” Sidibe said she’s traded in her crush on Justin Timberlake and now has a thing for Trey Songz. “I used to listen to his music when I worked in an office, and when I met him a few weeks ago, I couldn’t contain my excitement,” she told People. And Gabourey’s not afraid to show Trey how she feels. During their first talk she asked him, “Do you want to date? We could just get married!” The Oscar-nominated actress also said that she has “a thing for nerds.” ‘I’m looking for someone who is so sweet, who offers to help me put on my shoes before an event,” she said.   Aren’t we all, girl? Sidibe also gushed about working with Alice Tan Ridley, her on-screen mother on Showtime’s “The Big C.” “She is so impressive,” She said. “…She’s great at what she does for a living.”