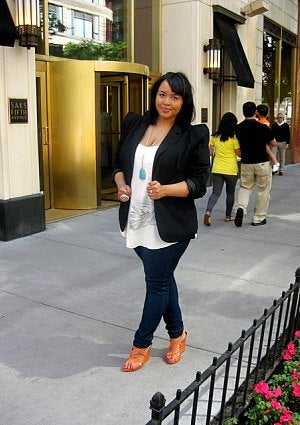 “Young, Fat and Fabulous” blogger Gabi Gregg is MTV’s new “Twitter Jockey.” Gregg, who goes by @gabifresh on the social networking site, won the network’s “Follow Me: The Search for the First MTV TJ” on Sunday, August 8. The 23-year-old plus-sized blogger and Detroit Native was one of 20 contestants chosen by MTV to vie for a $100,000 contract to be a social-media representative for MTV. She and four other contestants made it to the final round at the Brooklyn Academy of Music in New York City, where she won the popular vote during every elimination round. “My main goal is to really connect with the audience,” Gregg told MTV last night. “I don’t want to be the same as the MTV Twitter, I want to keep it personable and keep in touch with the followers. I want to give them a voice.” Gregg was also a part of ESSENCE.com’s May 12th live chat on “Beauty, Body and Race.” Follow her @MTVTJ.