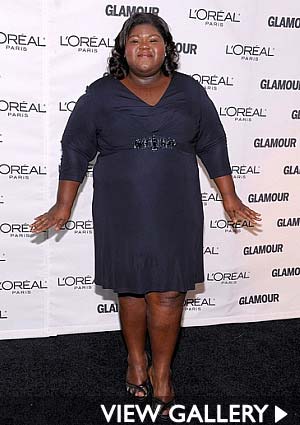 Gaboure Sidibe, 26, is giving established actresses a run for their Oscar, according to Variety. The ‘Precious’ star received three standing ovations at the AFI Fest premier of the Lee Daniels-directed film. Hollywood likes “breakout” performers and Gabby’s rising star status due to her performance as an illiterate, obese, 16-year-old single mother who’s dealt with a lifetime of sexual, physical and mental abuse could be her ticket to a trophy come award season. If nominated for a Golden Globe or an Academy Award, Sidibe could likely be up against veteran players like Meryl Streep.
Alternatively, while Gabby’s gaining popularity, last week the ‘LA Times’ reported that the Oscar crowd was less enthusiastic about ‘Precious.’