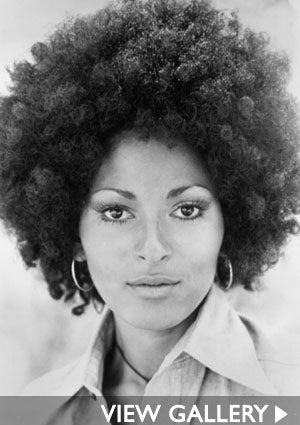 Pam Grier is on one hell of a ride! For starters, she’s back on the big screen today for the romantic comedy, “Just Wright,” starring Queen Latifah, Common and Paula Patton. Then, of course, there’s her autobiography — aptly titled “Foxy: My Life in Three Acts” — which has just landed on the New York Times Bestseller list. Add to that, her next film, “Larry Crowne,” which co-stars Taraji P. Henson, Julia Roberts and Tom Hanks. That ain’t too shabby for an actress who kicked-off her career 40 years ago and personified the blaxploitation era. While some fans will always remember her as the woman who brought “Foxy Brown” and “Coffy” to life (razor-bladed ‘fro and all!), there are some who still see her as “Jackie Brown” or Kit from the long-running Showtime series, “The L Word.” Film and television credits aside, Grier’s life journey has had a few bumps and sharp turns. As detailed in 288-page memoir, she endured sexual abuse as a child, battled and survived cancer, and not surprisingly, enjoyed her share of high-profile love affairs with the likes of NBA great, Kareem Abdul-Jabbar, as well as late comedians Richard Pryor and Freddie Prinze. Grier dialed ESSENCE.COM between morning TV interviews and afternoon book signings to chat about telling her story, healing old wounds and the one, simple thing she hopes for her future. ESSENCE.com: Why did you feel that it was time to tell your story? PAM GRIER: Well, I think that if you have a career for several decades and you live a great fruitful life, at a certain point, it’s time to give back. Lena Horne did it, as well as so many other women and actors who came before me and opened doors for me. I’ve had such great experiences and I thought it was time to empower and enlighten and inspire and share laughter with other people. ESSENCE.COM: Did you have any qualms about being so candid? GRIER: Why write a book if you can’t be candid? ESSENCE.com: Valid point! Did you feel as though you’d exposed yourself? GRIER: Either you can expose yourself or you can share yourself. There were times when I didn’t think I could [tell my story] and then I thought, “There are too many people who are passing on abusive behavior and dysfunctional, familial behavior.” We can stop it and people need to start getting help. We need a really mentally-well community because we can’t move forward if we keep passing these horrible behaviors down to women and children. We all need to think, we need to feel, we need to pay attention. ESSENCE.com: What do you think the response will be from those you wrote about in the book? GRIER: Kareem’s would be very favorable because our relationship was about respect. I respected the religion that he embraced. Even though I didn’t get a chance to really embace Islam, it wasn’t about rejection, it was about making a choice. Some people say that I rejected him or that he dumped me, but that wasn’t even in our vocabulary. There was nothing negative [between us]. We are friends, today. I know that he’s fighting a rare form of Leukemia right now and I have asked all my Twitter followers and Facebook friends to send good energy to him from the Universe so he can discover wellness. ESSENCE.com: You’ve got a birthday coming up soon. What do you wish for yourself? GRIER: To remain healthy. As a cancer survivor, remaining healthy is [the] pinnacle! “Foxy: My Life in Three Acts” is available now. Follow Pam on Twitter at twitter.com/pamgrier.