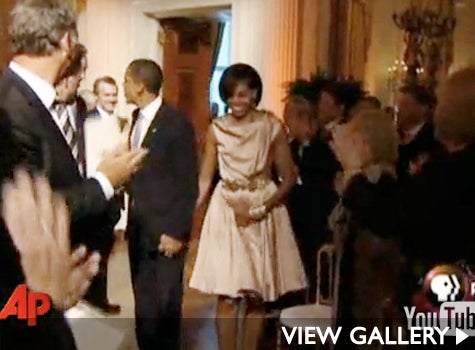 Byron Lars is no stranger to dressing stylish women. Back in March when we chatted with the iconic designer about his Byron Lars Beauty Mark Fall 2010 collection, Lars revealed that he was dying to get The First Lady in his designs. Lars’s dream came true last night at the White House Concert featuring a tribute to former Beatle Paul McCartney. Michelle Obama chose a sophisticated chic Byron Lars dress for the occasion. While no official images of the First Lady has been released as yet, video footage of the event gave us a mere glimpse at Lars’ creation. The lucky dress was a satin, champagne hued number with full skirt and cowl-neck. The look was finished off with a statement-making bejeweled belt. Mrs. O has the fashion Midas touch when it comes to catapulting established and new designers into household names. Just watch, Lars’ dresses are gonna start flying off the racks! For the designer, this union was meant to be.”I think we’ve been making clothes for her for years.”