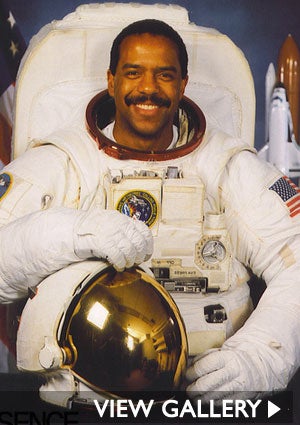 When Neil Armstrong climbed aboard the Apollo 11 space shuttle in 1968 there was a little Black boy in Houston, Texas, who was in total awe by the experience of seeing a man preparing to walk on the moon. “To see these White men do this wonderful feat for mankind and not see anyone who looks like me, that was the moment I decided that I wanted to be an astronaut,” says Dr. Bernard A. Harris, Jr. In 1990, Dr. Harris, Jr. was selected as a NASA astronaut and flew his first mission three years later. Along the way, he earned a doctorate of medicine from Texas Tech University School of Medicine and has donated all of his free time to programs around the country helping kids. “My new mission on earth is to ensure that all communities have the opportunities that I had,” shares Harris. In 1995, he established Dare to Dream, a nine-month, elementary school-based program that boosts children’s self-esteem by providing them access to positive role models. The passionate humanitarian travels to 10 cities a year on corporate sponsored tours. He is currently making his way around the country with The Dream Tour. The Dream Tour is a space age show that takes place in huge auditoriums, with props and special effects that bring the students into outer space. In addition to the high energy activities, they also incorporate real life role models called Rock Stars of STEM, highlighting individuals who exhibit excellence in the fields of science, technology, engineering and mathematics. These individuals attend and present throughout the tour to inspire the students. The guests deliver informative and motivational messages about their careers, what inspired them and why they chose their particular career paths. “It’s about spreading the word about math and science education,” says Harris. But Dr. Harris, Jr.’s humanitarian efforts do not stop there.  Harris also serves as president of The Harris Foundation, Inc., a non-profit organization he founded in 1998 to develop math, science education and crime prevention programs for America’s youth. He teamed up with ExxonMobil to create the Harris Summer Science Camp (BHSSC), a free academic program of The Harris Foundation, which takes an active role in shaping education in students entering grades 6 through 8. “The point of my efforts is to remind kids and adults of who they are. We are infinite beings with infinite possibilities,” says Harris. To learn more about the Dream Tour, click here. Read More