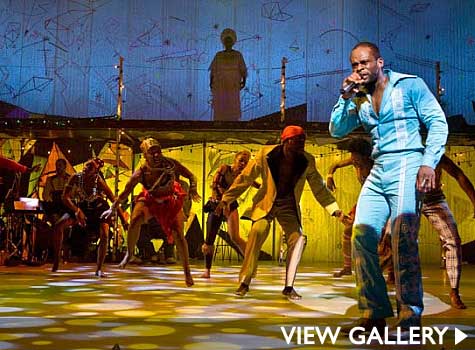 When I entered my 34th week of pregnancy, my mom-to-be journal had the following advice:

“If you’re about to become a parent for the first time, this is the last time in your life that you’ll be able to enjoy the luxury of being responsible only for yourself…Indulge yourself.”

Last week I did just that. I requested tickets to preview the new Broadway musical “Fela!,” director and choreographer Bill T. Jones’s fantastic tribute to the legacy of Afrobeat superstar Fela Anikulapo-Kuti. (Tonight the show officially opens.) Seeing this musical was high on my list of things to do before the baby arrived. The BF and I made it into a date night, walking hand-in-hand to the theatre after dinner. From the moment the house lights went dim and we were welcomed to da Africa Shrine (Fela’s famous dancehall in his native Lagos, Nigeria that serves as the show’s centerpiece), the musical’s 30-plus dancers filled the aisles and stage in all their African-and-seventies inspired finery. But while watching the high-energy aerobatics of the musical’s dance troupe, I was instantly transported to my life before pregnancy. Here are my two (short) tales:

Music Matters
I’m a latecomer to Fela Kuti’s music, or so I thought I was when I picked up my first Fela album in 2000. It was a reissued copy of “Expensive S**t/He Miss the Road.” I was drawn to the cover art, but didn’t know why. Then I played the album and stopped when I heard “Water Get No Enemy.” I had heard this before…several times…but couldn’t place where. The familiarity of the song was unnerving. The more I listened to it, the more I was convinced I grew up with the song. I asked my mom did she play it but she’d barely knew who Fela was. Then she said, “Your father was into all kinds of music. He probably played it when you were little.” Aha! Since the album was released in 1975, I was only about 2 1/2 years old, and my impressionable ears probably had no choice but to love its Afrobeat groove because my dad played it all the time. The remarkable thing, nearly 25 years later, the song still had a hold on me. I’m already getting a jumpstart on programming my little ones ears. I just hope she’ll smile when she remembers the first time she hears “Water Get No Enemy.”

I Dreamed of Africa
About two years ago, one of my best friends and I made a trek to Ghana. It was my most anticipated journey and yet turned into one of my worst trips. I won’t go into details but let’s just say that it was in Africa I found out how American I am (I’m not good with roughing it). There were some good moments: I fell in love with red red sauce and Fanta; I loomed kente cloth in an Ashanti village; and my tour of the slave castle at Cape Coast will never leave me. Everything else I experienced, I want erased from my memory. But fast forward back to my aisle seat at “Fela!”–where the heavy percussions fill the theater and the stage decorations remind me of walking through lively downtown Accra–and my trip to Africa turns from foul to fondly. Two years ago, I was just a girl living my dream of seeing the Motherland. Now, I’m having a girl who will have her own dreams. I pray she’s courageous enough to follow them, even when the smell outside her hotel room makes her want to cry.


TELL ME WHAT YOU THINK: How are you indulging yourself before your baby arrives? If you’re a mom, how did you enjoy your last baby-free days?