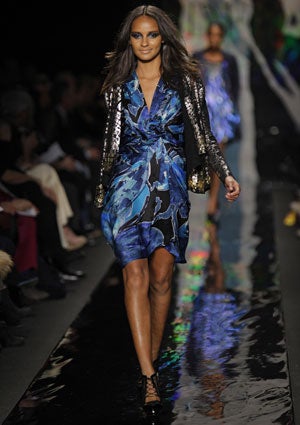 Diane von Furstenberg Fall 2010 February 13, 2010 Valentine’s Day was the ideal occasion to unveil Diane von Furstenberg’s Fall 2010 collection of pretty, flirty dresses that conjure up lots of romance. Nevertheless, the DVF show wasn’t all about expressing your feminine side, in fact the show notes have Diane von Furstenberg stating, “I always wanted to live a man’s life in a woman’s body.” What does that mean to DVF? It means juxtaposing hard and soft to create a seamless balance. There were moments when leather, elbow patched toppers and velvet blazers were thrown over silk, chiffon dresses which make for great cozy and chic looks for fall. In addition to pushing the menswear aesthetic this season, DVF, as to be expected, has a tone of drop-dead gorgeous dresses to keep us satisfied. For Fall 2010 DVF dresses are heavy on embellishments like chain mail on a black shift and prints in a vivid array of hues like purple, navy, yellow and brown. These are the pieces her clientele has come to expect and love from DVF. Fall 2010 marks the final collection designed by Nathan Jenden who is leaving to launch his signature collection.

Rachel Roy Fall 2010 February 13, 2010 Rachel Roy’s Fall 2010 runway show was a play on texture and lightness. Known for her ability to create elaborate, structures drapes with rich, luxurious fabrics, this collection the designer tones down the intricate detail work and decided to streamline her pieces. This Fall 2010 Rachel Roy is all about felling effortlessly sexy in trousers, shirts and dresses that are fluid and non-restrictive. We’ve got dibs on the chic silk jumpsuits that look easy enough to wear to bed. Through on some killer heels and layer on one of Rachel Roy’s luxurious cashmere cardigans and you’re ready to approach next fall with style confidence. Read More: