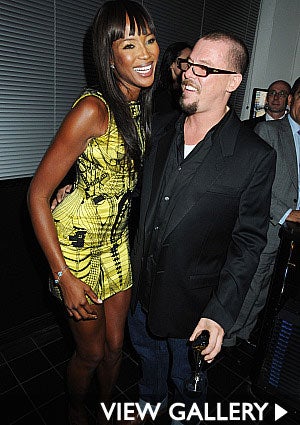 New York Fashion Week kicked off on a very somber note today with the tragic news that this generation’s brightest and most exceptional designer, Alexander McQueen, was found dead in his London home this morning. The 40-year-old British designer’s sudden death has been reported as a suicide. This chilling news comes only days following the death of McQueen’s mother and hours before he was set to reveal his secondary line, McQ, at NYFW. Fashion’s visionary enfant terrible, McQueen was often regarded as an outspoken leader in the industry and his immaculate body of work has inspired many designers. McQueen began grooming his illustrious career as an apprentice in Savile Row at the young age of 16. Soon after graduating from Central Saint Martins in the 90’s, he launched his line to great fanfare. McQueen became chief designer at the renowned Givenchy house in 1996 and then moved to Gucci as creative director in 2001. He would continue to push the boundaries of fashion throughout his career from his modern design aesthetic to putting together some of the most  elaborate, theatrical fashion shows the industry has ever seen. Just recently McQueen created much buzz with his Spring 2010 ready-to-wear show. Held in Paris back in October, the big-budget show was a vibrant mix of technology and fashion with robotic cameras, an illuminating runway and a movie playing on a large screen. McQueen was once again pushing the envelope to great success not only with his runway show but with those beautiful reptile patterned dresses and those notorious 10-inch high, hoof-like shoes recently worn bravely by Kelis. Alexander McQueen had fans in women all over the world. Just last month Michele Obama wore a bold, pinstripe Alexander McQueen suit to a YMCA community talk. Supermodel Iman who has known and worked with the designer for years expressed her sorrow to ESSENCE.com: “I am in total shock. This is a tragedy for the entire fashion world. He was one of the best and the brightest of talents; a trailblazer like no other.  He will be profoundly missed.” McQueen was due to unveil his new collection in Paris on March 9th. To honor Alexander McQueen, we have pulled together a gallery of his looks.