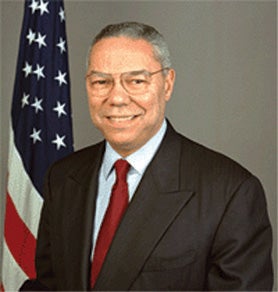 DON LEMON: President and Mrs. Obama have sent out a national call to service. Are African-Americans answering that call?
GENERAL POWELL: I know that in the work I do and [Alma], my wife, does as the chair of America’s Promise, we are seeing more and more people step forward. But it’s not just a one-time thing. You can’t just have a day of service on Martin Luther King’s birthday. We’ve got to get deeply involved in working with our kids on a continuing basis. We need more African-American men to step forward and serve as mentors to young kids who don’t have a responsible caring adult male in their lives. We need Boys and Girls Clubs. We need Big Brothers and Big Sisters. We need mentors. Otherwise these kids will find bad adults to copy from and we’re going to lose them.


LEMON: You bring up a very good point. I just recently did a report on Chicago’s youth violence and most of the young men who were victims or perpetrators of crime didn’t have a role model, especially an African-American male role model.
POWELL President Obama has spoken out rather clearly about this, that fathers have got to start doing their jobs. Every child has a father. And some of those fathers don’t want to live up to the responsibility of being a father. Whether it’s a father in a marriage or a father in a good home, that father is a father and owes that child financial support, owes that child companionship, owes that child an example in life. If it hadn’t been for my relatives and my parents and my cousins and my priest and all the other people in my neighborhood, I wouldn’t have made it. But they had a level of expectation for me. Drop out of high school? You’ve got to be crazy. So you go home and tell your parents you’re going to drop out of high school? The answer would be, “We’re going to get rid of you and get some other kid.”


LEMON: How do you convince African-American men that service is a worthwhile effort?
POWELL: You tell them that without that effort, all of our achievements over the last 50 or 60 years are being put at risk. The statistics are frightening. Fifty percent of our African-American youngsters are not graduating from high school. And of that 50 percent, a higher percentage of boys are not graduating than girls. And when they get out of high school, if we can get them into the college, you will find six girls in college for every three or four boys who are in college. Those six girls will graduate at a higher rate than the three or four boys.


LEMON: This is true.
POWELL: This is a moral disaster for the African-American community. This is not why Rosa Parks rode in the back of the bus, or why Martin Luther King and all of his colleagues marched. We didn’t do it so that these kids could fail because they don’t have adults in their life teaching them how to succeed. We’ve got to teach them that you’ve got to behave. You’ve got to learn what it means to mind somebody. You’ve got to read to your kids. You’ve got to act like responsible fathers.You’ve got to get them a good diet, which means you’ve got to pay whatever is necessary to support your child in a clean home and provide them quality food so that they can grow properly. And we’ve got to invest in our educational system to give these kids a quality education.


LEMON: How did you become involved in the President’s Renew America Together initiative? And what’s your role?
POWELL: The President-elect was aware of the work that Alma and I had done together on America’s Promise. And so as part of the transition effort, he intended to make this an important part of his administration, and he wanted to get started earlier. And so he asked, launch his first initiative in this regard, which was called Renew America Together. And I launched that for him on the 9th of January, 11 days before the inauguration. And we also announced the Web site where people could sign up to get involved in service to their community. It’s called usaservice.org. Now he’s done many things since then. But I’m so pleased that he has made this a major part of his administration and his agenda.

LEMON: Who were your African-American role models? What did they teach you about your manhood? Was there anything that guided you personally or professionally from any one thing?
POWELL: They were first and foremost my family. When I was a young kid, born in Harlem, raised in the Bronx, it was my family that taught me how to behave, taught me what they expected of me, gave me a sense of shame, and told me to “mind.” It’s a word that’s not used enough anymore.You may remember it, Don, from your upbringing, but I certainly do. Mind your manners. Mind what you say. Behave yourself. So first and foremost, my role models, the most important ones, were my family. Then I tried to find role models everywhere. I tried to observe people who were successful in life. In the black community, we didn’t have that many in those days. You had Joe Louis, you had Jackie Robinson, you had Ralph Bunche, you had Willie Mays, a lot of athletes.


LEMON: Those are pretty good, though.
POWELL: They were good. You had General Benjamin O. Davis, Sr., the first black general in World War II. But it was still a country where people of color could not reach the heights. I was nevertheless inspired by these folks who did the best they could in the time in which they lived and showed that if you do your very, very best, you will be recognized and rewarded for it. Just like Jackie Robinson was told by Branch Rickey, don’t fight these people. You just go do your best. That’s the best way to fight. And I’ll never forget that lesson. I entered the army five years after the last segregated unit was closed down. I entered in 1958 and at that time the army was fully integrated, the most integrated institution in American society. And what did my commander say to me, “We don’t want to hear any sad stories about you were born in Harlem and raised in the Bronx. Don’t tell us anything about your immigrant family. We don’t care if you are black, white, blue. The only color we care about now is green. You’re in the army. If you perform, you’re going to do well. If you don’t perform, we don’t want to hear any excuses. We’re not interested in you.”

Don Lemon anchors the weekend edition of CNN Newsroom. For more information on Black Men in the Age of President Obama, log on to CNN.com