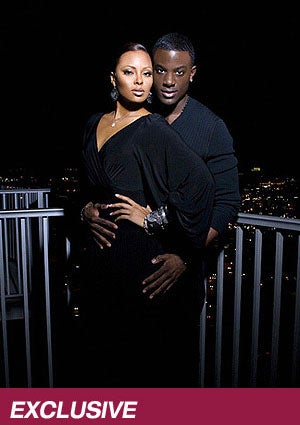 Five months before their July 17th wedding, model/actress Eva Marcille, 25, and actor Lance Gross, 28, have split up. When ESSENCE.com reached out to the couple’s representatives for confirmation about the break-up we were given this official joint statement. “Lance Gross and Eva Marcille have mutually decided to end their relationship. The split is completely amicable,” the statement reads. Last month the blogosphere buzzed that Marcille and Gross, who had been together for nearly three years, were on the rocks, due to an alleged argument between the two during Super Bowl XLIV weekend in Miami. The couple got engaged on Christmas Eve 2008, while vacationing with family in the San Bernardino Mountains outside of Los Angeles, after dating for a year and a half. The couple announced their engagement to ESSENCE.com. We reported: “Marcille and Gross decided to open gifts after dinner in their rented cabin. When Marcille opened her gift–a pillow with a note attached that read: ‘Hope you like it. Give this pillow to the man you love and he will explain.’ Gross used the pillow as a cushion and got on bended knee and popped the big question with a 3.36-carat 1895 Pave Cartier ring at 11:30 PM PST.” “She took full control of my heart and is the only woman that has ever made me feel that way,” Gross told ESSENCE.com during happier times. Ironically, Gross stars in the recently released movie “Our Family Wedding,” which he said was like rehearsing for the couples upcoming nuptials. “I was in love with him before we ever met. He’s my dream guy!” Marcille told ESSENCE.com after Gross popped the question. According to the joint statement from their reps, “both parties remain friends.” Read more: