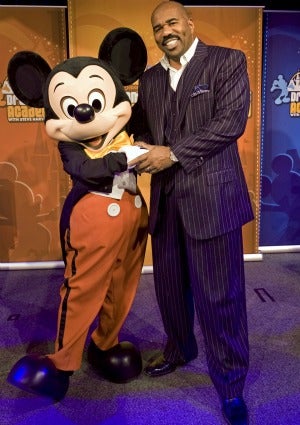 Now this is the stuff dreams are made of. The Walt Disney Co., along with ESSENCE, is gearing up for another year of inspiring teens to pursue their professional and personal goals by taking nominations for the fourth annual Disney Dreamers Academy. The four-day program for teens ages 13-19 offers seminars and workshops given by motivational speakers and celebrities like Steve Harvey, who share their success stories and encourage young people to stay motivated in pursuit of their dreams. From March 3-6 2011, selected Dreamers from across the country will receive an all-expense paid trip to the Walt Disney World Resort in Orlando for four packed days of workshops, seminars, celebrity meet-and-greets and, of course, time to indulge in the Walt Disney World parks. During the hands-on workshops, the 100 high school students selected will be able to discover a world of career options — everything from animation to entrepreneurship to zoology. Dreamers will also learn interview skills and techniques for professional networking. “Each year we strive to find young people who may have a will or passion, but may not have the courage to explore their dreams,” Steve Harvey told Disney. “So we hope to unlock the power that will allow them to pursue their hearts’ desires.” Nominations for the 2011 Disney Dreamers Academy are open until October 31, and parents and friends of teens are encouraged to nominate students that will benefit from the academy’s fun-yet-educational atmosphere. “Disney’s Dreamers Academy is helping teens take steps in the right direction, and we want to be right there with the students, both encouraging them and sharing their stories,” said Angela Burt-Murray, Editor-in-Chief of Essence Magazine. For more information, or to nominate a teenage you know, visit Disneydreamsacademy.com.

TOPICS:  Go For It