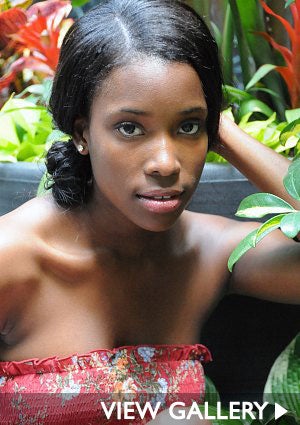 As a child, Nataya Smalls catwalked through the hallways of her home in her mom’s high heels, dreaming of being a model like Naomi or Tyra. This year, the 20-year-old decided to own her dreams by entering the New York casting call of the nationwide “ESSENCE It Girl” competition. Smalls grew up in the fashion capital’s backyard of Norwalk, Connecticut, and spent her free time going to New York City for fun. One of ten siblings — five boys and five girls — this former tomboy knows how to hold her own in a crowd. ESSENCE.com sat down with our new “It Girl” to find out more about her life and dreams as she launches her fashion career with a one-year contract at Elite Model Management. ESSENCE.com: First, we’d like to say congratulations on winning the “ESSENCE It Girl” competition. You are truly beautiful. Describe your family and where you come from. NATAYA SMALLS: I have a lot of siblings — nine in total. I’m the middle child. A lot of people think the middle child is supposed to be quiet, but I’m totally the opposite of that. I’m outgoing, optimistic and loud, and I just like to have fun. I think I get that from my mom and dad. Both of them are so silly and alive and bubbly. ESSENCE.com: What were you like as a child? SMALLS: I was kind of a tomboy in elementary school. My dad bought me all these boys clothes and I always wore baggy pants. I was friends with a lot of boys and all they used to do was play basketball and I just wanted to be like them, I guess. I played basketball in middle school and high school. ESSENCE.com: What did sports do for your self-development? SMALLS: I think sports really helped my self-esteem. All of the girls on my high school basketball team were tight, we had each others’ backs. I met my best friend playing basketball and it kind of rounded me out. I had a cool coach, too. He was like a guidance counselor. ESSENCE.com: How did you go from tomboy to model-in-the-making? SMALLS: I knew I wanted to be a model since I was little. When I was six or seven, there was a long hallway in the house we used to live in, and I used to put on my mom’s heels and walk down that hallway and act like I was on the runway. It’s something I’ve always wanted to do. ESSENCE.com: What models do you look up to? SMALLS: Definitely Tyra Banks! Also, I love Chanel Iman and Naomi Campbell. ESSENCE.com: What fashion designer do you admire? SMALLS: I would have loved to work with Alexander McQueen. I watched his runway shows each season on TV. He was so avant-garde and artsy. ESSENCE.com: As a Black model with a different look, are you trying to break any barriers in fashion? SMALLS: It doesn’t really matter to me what skin color you are. That doesn’t really make a difference. I think the fact that I have darker skin can help some darker girls embrace their beauty. ESSENCE.com: At 20, you’re also a little older than most models start out… SMALLS: Being older doesn’t bother me too much. Everyone says I don’t look like I’m 20. I look like I’m 17. I’m already more mature, which is good. I’ve been through high school and some of college so I know how it is. ESSENCE.com: Why did you decide to try out for the “ESSENCE It Girl” competition? SMALLS: It’s a funny story. I had just been fired from my job, which turned out to be a good thing because if I didn’t get fired I wouldn’t have been able to come to New York City because I wouldn’t have had the day off. Then, that same day I was supposed to go to Albany to try out for “America’s Next Top Model,” but the girl that was supposed to drive us backed out at the last minute. So I got an e-mail about “ESSENCE It Girl” from Tyra’s website and I came by myself. And look at me now! ESSENCE.com: What do you think has prepared you for this experience? SMALLS: A few people in my family have passed away from cancer — my grandmother, my aunts, my uncle, my grandfather — and their deaths have made me mature quickly and become a lot stronger as a person. ESSENCE.com: Where do you think modeling will lead you? SMALLS: Further into the fashion world. I’d like to end up doing fashion broadcasting. If I wasn’t modeling, I’d still pursue something in fashion. ESSENCE.com: Now that you’re the ESSENCE It Girl, what are your expectations? SMALLS: I’m not really sure, but I know it’s going to be challenging. I’m so excited to travel. I’ve never been outside of the States. Elite told me to get my passport ready. I know that the process may be a learning process, but I’m not really afraid of anything. I’m excited to try new things.
Loading the player...