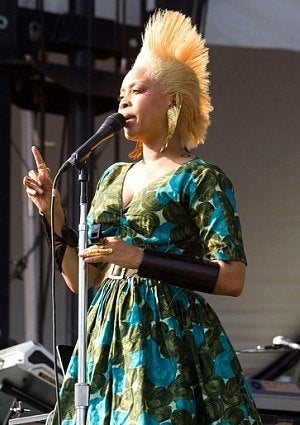 The spell Erykah Badu usually casts on R&B and rap stars must also work on judges. The neo-soul diva got off with paying a fine and a few months probation for her recent striptease on a Dallas street. According to the Associated Press, a city spokesman said Badu has paid a $500 fine and will serve six months of probation for going nude during her “Window Seat” music video shoot in Dallas. Shot March 13 in Dealey Plaza, where President John F. Kennedy was fatally shot in 1963, “Window Seat” served as the first video from Badu’s New Amerykah Part Two: Return of the Ankh. The video ends with her naked and falling to the ground as if she had been shot. In April, police sited the Dallas native for disorderly conduct after a witness made a sworn complaint. Badu’s spokeswoman has yet to release a statement, but we wonder what the judge thought of Ms. Badu’s new ‘do.