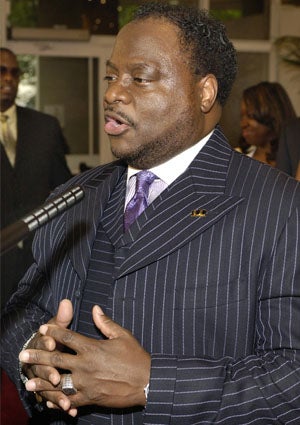 As promised last week, Bishop Eddie Long was indeed in the pulpit Sunday morning at New Birth Missionary Baptist Church, despite allegations of sexual misconduct by four young men in their early 20s. If there were questions about Long’s continued leadership at New Birth, they were not at all discernible. Speaking loud enough for others to hear, a female parishioner, who appeared to be in her mid-50s, stated before the 8:00 AM service, “I hope things are back to normal.” Judging by the enthusiastic reaction of those in attendance, things did appear to be back on track. Unlike last week, when Long stood before the congregation for less than 30 minutes, this Sunday, he stood ever-defiant and firmly at the church’s helm, preaching for over an hour and even leading communion. Although the day’s sermon focused largely on the power of declaration and affirmation, Long did make sly references to the allegations against him, commenting that “I won’t be pulled into a street fight.” In addition, he claimed to accidentally direct parishioners in the early service to Job 8:22 which reads, “They that hate thee shall be clothed with shame and the dwelling place of the wicked shall come to nought,” according to the World Publishing edition of the King James Bible. Long later retracted that reading, saying that he intended parishioners to go to Proverbs 8:22, which reads, “The Lord possessed me in the beginning of his way, before his work of old.” Long addressed the mistaken scripture by adding, “Somebody said I will let no man be so powerful in my life to force me to hate him.” Not surprisingly, parishioners at both the 8:00 am and 11:00 am services continue to express their unwavering support for their Bishop, but long-time New Birth member Portia Kirkland has decided to take a break from the church because of the controversy. “I didn’t go to church today because I’m concerned about the boys as well,” says Kirkland, a music industry insider who uses her weekly Internet radio show, Sky High, heard on Beehivefm.com, to bring believers and nonbelievers together around controversial issues such as the allegations against Long. For Kirkland, who says she has been “[spiritually] fed” by the Bishop’s messages in the past, the problem also lies with the congregation’s overall reaction. “Once I saw the congregation running out to support him not knowing if [the allegations are] true or not, that really bothered me,” says Kirkland. “As much as they rushed to support him no matter what, I [wondered] why we didn’t do that for the boys who are also our brothers in Christ.” It doesn’t look as if Bishop Long has any intention of stepping down from the pulpit while the allegations against him continue to develop at such a rapid pace. With a faith that seems somewhat unbroken, his congregation is standing right behind him. But as this whole episode plays out, one-by-one, parishioners will start to look at how everyone involved has been affected, and will examine their own measures of forgiveness.