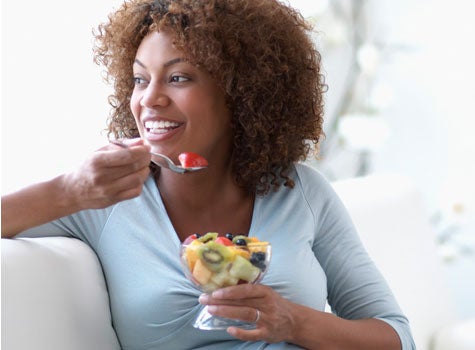 We have all heard that African Americans are prone to diabetes, and as First Lady Michelle Obama leads a national movement to fight childhood obesity, New York registered dietitian Constance Brown-Riggs has made it her mission for 25 years to address diabetes in the Black community. She tells ESSENCE.COM about some of the misconceptions of diabetes and how it can be prevented. The author of “Eating Soulfully and Healthfully With Diabetes,” she offers tips for making healthy, affordable dining choices that still pack flavor. ESSENCE.com: What was your diet like growing up? CONSTANCE BROWN-RIGGS: My family is from the South, so the focus was on eating soulfully, traditional foods from the South. My eating habits changed as I grew and became a dietitian, but growing up, I can’t say I ate healthy. ESSENCE.com: When did diabetes prevention become your mission? BROWN-RIGGS: I don’t have diabetes, but it is something that runs in my family. Growing up, I saw family members with amputations, and I saw them doing insulin injections, but I didn’t understand what was going on. The more I understood diabetes, I decided to make that my mission, in a culturally relevant way. ESSENCE.com: What are the major misconceptions of diabetes? BROWN-RIGGS: Often times, health educators assume if someone is African American that they are not willing to make changes in their diets. They are not telling them that they don’t have to avoid their favorite foods completely. Diabetes is not a death sentence–it can be managed, but you can’t deny it. Sugar does not cause diabetes, but if you have it, you have to watch your sugar intake. The main cause [of Type 2 diabetes] is obesity. ESSENCE.com: What are the major reasons why healthy food appears to be more expensive than unhealthy food? BROWN-RIGGS: If someone tells me that it’s much cheaper for them to go to McDonald’s and get that dollar meal, I say you are buying cheap and paying more–you are paying more in the cost of your health. You are not getting vitamins and minerals from that dollar menu. You can go to the store and get dry beans and a bag of rice for the equivalent price of that dollar meal, and you’ll have leftovers. Buy fruits and vegetables that are in season and they are going to be less expensive. ESSENCE.com: What are the best affordable, healthy foods to order at a restaurant? BROWN-RIGGS: Avoid foods that are deep-fried and choose salads and foods that are roasted. Half of your plate should be leafy vegetables, one quarter should be meat or protein, and the other quarter is your starch. Even if the food is heavier, like fried chicken with mac ‘n’ cheese and collard greens, if you still use that plate method to control your portions, you’ll have a lower amount of sodium and fat, and that will make a big difference. ESSENCE.com: You write about eating soulfully and healthfully; what are some of your favorite meals to cook at home? BROWN-RIGGS: My husband is from Louisiana so we eat a lot of gumbo. On occasion we make a traditional version loaded with sausage and chicken, but we also make a healthier version. We bake the roux in the oven rather than on top of the stove, and we use chicken apple sausage, so it still has flavor–because if it doesn’t taste good, it’s not going to work. ESSENCE.com: Everyone knows they should be eating less sugar, but for many of us, that is a difficult choice. What do you suggest? BROWN-RIGGS: As an example, take sweet potato–rather than making candied yams, which are loaded with sugar, sprinkle baked sweet potato with cinnamon and drizzle it with pear juice, or add sliced pears before you put it in the oven. It’s still going to be sweet and you don’t need heavy syrup. ESSENCE.com: If a person is diagnosed with diabetes, what should his or her first steps be? BROWN-RIGGS: One of most important steps is to see a registered dietitian and start managing your blood sugar. You have to eat smaller portions and exercise, but that doesn’t necessarily mean going to the gym to lift heavy weights–a daily walk will do wonders. ESSENCE.com: When you speak to young people, what do you tell them about healthy eating? BROWN-RIGGS: A lot of children are aware that they are not eating healthy, but part of the problem is the adults are feeding the children and purchasing the food. It’s not difficult to get children to understand the problem. Unfortunately, diabetes is increasing in the African American community at epidemic proportions as well as obesity. We have to eat less and move more. Constance Brown-Riggs’s Tips on Eating Out: “The African American Guide To Living Well With Diabetes” by Constance Brown-Riggs will be released by New Page Books, July 2010. Read more:
Loading the player...

Drake to be Presented with Artist of the Decade Award at 202...

Is The Fenty Skin Butta Drop Body Cream Worth It? I Found Ou...

26 Beauty Gift Ideas For Your Friend Who Loves Skincare & Sm...