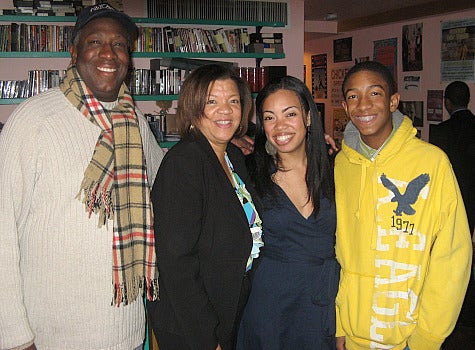 Tiffany D. Jackson’s father, Duane Jackson, received a call from President Obama earlier this week. Not an everyday occurrence for the Vietnam vet, but this weekend Jackson saved New York City, and the country as a whole, from a tragedy that could have derailed our peace of mind and sense of security. Jackson was one of the two Times Square street vendors who pointed out the suspiciously smoking SUV to a police officer, who then cleared out the tourist-heavy district of Manhattan as the country watched and prayed… My Dad has been working under the Planters Peanut sign on 45th and Broadway for more than a decade. He’s my official landmark whenever I’m in the city. I practically grew up in Times Square with him. I’ll never forget the day he came home talking about some man playing a guitar in his underwear and a cowboy hat. He was barely fazed by it. People know him as the “Mayor.” The other vendors, from the t-shirt guys to the caricature artists to the hot dog stand owners, know me as his daughter. Dad rarely overreacts about anything and it drives my family insane. No matter the situation, he seems to always stay amazingly poised and relaxed during the most dire of circumstances; whether it’s rushing a child to the emergency room or an ash cloud barreling toward him on 9/11. He’s always said, “If you see everyone running in one direction, just stand still. Observe, think, then react.” This advice has saved me on many occasions. So, I wasn’t surprised by his reaction to the potential car bomb, a mere eight feet away from his normal spot. When I saw the pictures of the truck and the explosives inside it, the only thought that crossed my mind was “Wow, I could have lost him.” The explosion would have been unavoidable. Losing him would’ve crushed me. I know everyone now considers him to be a hero along with the other vendors and policemen, but he’s always been my hero. He instilled in me, at a very young age, to be an independent woman and self-reliant. Teaching me how to drive when I was thirteen, how to balance a checkbook, and how to iron a crease that could cut someone if they stood too close. But whenever I need him, he’s there. He’s rescued me on several occasions when my car broke down in the middle of the night, and he’s chased away a few spiders. I realize not many women have had that experience growing up. For that, I am more grateful that I have him in my life. He, of course, doesn’t see himself as a hero. He considers himself a normal guy. He visits my 101-year-old Grandpa every Tuesday to give him a shave, plays 18 holes of golf, and is the President of the Vietnam Veterans of America chapter. People are now stopping by his stand, buying purses, taking a picture, showing him so much love. Words cannot express how proud I am of him, but then again, that’s nothing new. I’m just glad everyone is catching up to what I’ve known all my life. TIFFANY JACKSON: Hey, Dad. DUANE JACKSON: Hey, sweetie. TIFFANY: You’ve been a New Yorker forever. People generally tend to mind their own business and rarely speak up. You did the opposite. Do you think that your action will encourage more to speak and act? Is this something that should be taught and promoted more? DUANE: It’s a combination. I saw something that looked suspicious, told a police officer, and fortunately the bomb didn’t go off. Some folks who were there walked by and saw what happened and thought that they could’ve have been hurt if that bomb went off. In the short term, I think there will be more of a sense of awareness, not only in New York but around the country. In the long run, we need to teach and preach the idea of being aware and not taking anything for granted. You should always be aware of your surrounding in a commercial space. TIFFANY: Do you think your military experience had anything to do with your reaction? DUANE: Definitely. The military teaches you discipline, how to be cautious, and how to react in certain situations. TIFFANY: Got any words of advice? DUANE: I say “If you see something, and feel something, tell someone. And don’t fear having a friendly relationship with the police, fire department, even teachers. Those people are always on guard.” TIFFANY: Okay, thanks Daddy. DUANE: You’re welcome, baby girl. Tiffany Jackson is a Video Producer and Writer living in Brooklyn, NY. Follow her on Twitter @Writeinbk