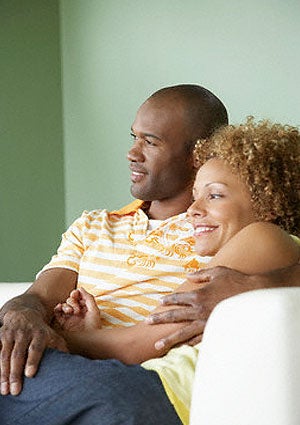 A ten-year study found that women who live with men–even if they do not have children–put on more pounds than women who do not live with a man. We’ve seen lots of evidence that pregnancy and childbirth can lead to weight gain but this is a first. So we reached out to Rovenia M. Brock PhD, a.k.a. Dr. Ro, who is an author, nutritionist and fitness expert to get to the bottom of this.

ESSENCE.com: Why would living with a man make a woman gain more weight than a woman who does not live with a man?
DR. RO: I am not surprised by results of the study. One thing that is clear in the women I’ve worked with throughout the country–celebrity or non-celebrity–women are most often responsible for food choices and prep in the household. If that’s a household where a woman cohabitates with a male partner, she often changes her patterns of what she eats, when she eats, and how much she eats to be more in sync with her man.

ESSENCE.com: And being in sync with her man means?
DR. RO: Bottom line: it means a woman gains weight. I see it as most women being “guilty by association.” This same woman who wasn’t going out to eat a lot on her own now finds herself going out more and maybe to a place that serves food her man prefers. Likewise, the food she prepares at home isn’t just taking her own taste into consideration, but his too. This often means heavier choices and larger portions.

ESSENCE.com: So, when it comes to nutrition, men and woman are really not equal?
DR. RO: The number of calories a man typically consumes is more than the number a woman typically consumes. And the number of calories required for a man is, in fact, larger than the number required for a woman. But when that same man and woman sit down to dinner in a restaurant, or at their kitchen table–if that meal is a “man-sized meal”–a woman has to know she is eating that meal with her partner much to her own dietary peril. Women cannot consume the same number of calories as men and expect to be healthy and fit. And, if she’s got a man who enjoys meals like the construction worker’s lunch, she’s really got to watch it.

ESSENCE.com: What should a woman do instead?
DR. RO: Stick to smaller portions. Most healthy women who are sedentary to moderately active require roughly 1,200 to 1,500 calories.

ESSENCE.com: Break down a day for a woman who wants to be healthy and fit. What should she eat and how much?
DR. RO: A half cup of oatmeal with berries and one tablespoon of flax seed or eggwhite omelet with veggies and a glass of tomato or other fruit juice, and a cup of green tea, for breakfast will do the female body good! For lunch and dinner, lean protein in three to four ounce portions with one to two cups of veggies and fruits.

Basically, if a woman consumes three meals of 350 calories each, with between-meal snacks of 150 calories each, she’ll be on the road to healthy living and if it is required, weight loss. This doesn’t mean you can’t enjoy meals with your man, it just means you can’t enjoy as much of the calories he does, in the larger portions that he can eat, and still feel your best.

ESSENCE.com: The study also looked at baby weight and you say this is of special concern to the African American woman.
DR. RO: As for baby weight, Black and Hispanic women tend to have greater problems losing baby weight due to multi-parity (multiple births), according to leading research in this area. Another factor of weight loss challenges for African American women might be explained by the “Thrifty Gene.” This is a gene that German researchers from the University of Essen and leading endocrinologists in the U. S. believe might have brought African survivors through the Middle Passage. When food was scarce or non-existent,  this so-called Thrifty gene helped African American slaves to survive. In today’s world, this metabolic pattern works against the descendants of the same people it once protected.What saved our lives then is not an asset in times of abundance and super sizes.

ESSENCE.com: We took a poll to get reactions to the study the day it came out and the results show that more than half of the participants agree that living with a man does mean putting on more weight.
DR. RO: The reaction of the ESSENCE.com community is right on target, they know of what they speak! I understand the perspective, that more than half say living with someone makes you more comfortable, so you don’t work out as much. But you still have almost 30% saying if you are dedicated to your health, living together doesn’t change your dedication. That’s the voice I’d like people to listen to. Fitness is really an everyday lifestyle choice. It’s not a crash diet or ignoring your calories and the gym for weeks on end in denial–whether you’ve got a man or you live alone! If you make the choice to eat what’s healthy for your body and exercise in that same way, you’re going to feel better for you, and, if you want, for that man you’re living with, too!

Rovenia M. Brock PhD, a.k.a. Dr. Ro, is an award-winning nutritionist, fitness expert, lecturer, media personality, and author of, “Dr. Ro’s Ten Secrets to Livin’ Healthy” (Bantam Dell, $6.99). She wrote the syndicated column “Livin’ Healthy with Dr. Ro,” for BET.com, where she served as Resident Nutrition Expert. She has been featured and quoted widely in print venues, including Ebony, O magazine, Essence and Self, as well as many major daily newspapers.