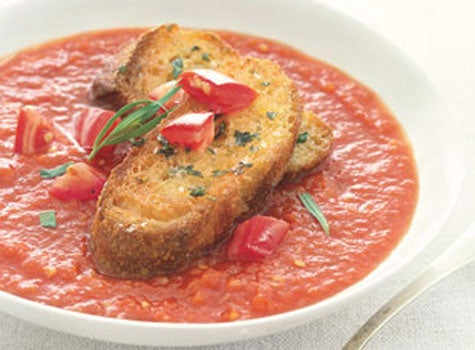 If you are like me, getting sick was never a fun time. It was awful being suspended in a state of isolation, tied to your bed, doing absolutely nothing and bored out of your mind. But the worst part was hearing the dreaded sound of the electric can opener because you knew what would soon come: canned soup.

I don’t know what was worse; consuming a high sodium dish of noodles and oily broth with a side of saltines, or a case of the sniffles. I chose the former. And don’t get me started on dry soup mixes! Ramen noodles and others are loaded with tons of artificial flavorings and enough salt to give anyone high blood pressure. Well, have no fear because for 2011 the soup has been chopped, screwed, blended, chilled and remixed just for you. It has really become one of America’s greatest pastimes, almost as popular as baseball, and I partake in it every chance I get.

Think of soups as the salad of 2011! It is now okay to pile mounds of tasty topping in the center of your bowl and watch then slowly sink and release flavors into your dish. Croutons, corn, eggplant, sweet peppers, zucchini, pumpkin seeds and cheese with a handful of herbs add texture, dimension and color to your run-of-the-mill cup of broth. Want tomato on tomato action? Dice heirloom tomatoes atop a creamy, spicy bisque for intense flavor. Feeling fishy? Try sauteing shrimp in olive oil and loading over a bowl of fresh corn chowder with a piece of warm, crunchy bread. Yummy!

But this doesn’t just apply to hot soups. No, no, no! Cold soups are just as important as their boiling siblings. Chilled gazpachos with watermelon drops, and iced cucumber soups combined with frozen grapes seem more like desserts than a main course — and they’re popping up on menus across the country. But one of the all-time favorite dishes, tomato soup with a mini grilled cheese, is served at Elmo’s Restaurant in the Chelsea neighborhood of New York City and it keeps me coming back time after time after time. Since the chef refuses to give me the recipe, I have discovered an alternative that is just as tasty and delivers the exact same punch. Ladies, I introduce Chilled Tomato-Tarragon Soup with Homemade Croutons.

Preparation
Mix 1/4 cup oil and 4 tablespoons tarragon in bowl. Season with salt and pepper. Brush over both sides of bread. Toast bread in large skillet over medium heat until crisp, about 6 minutes per side. Transfer croutons to plate.

Strain soup into bowl, pressing with rubber spatula to extract as much of the juice and solids as possible. Discard solids in sieve. Season soup with salt and pepper.