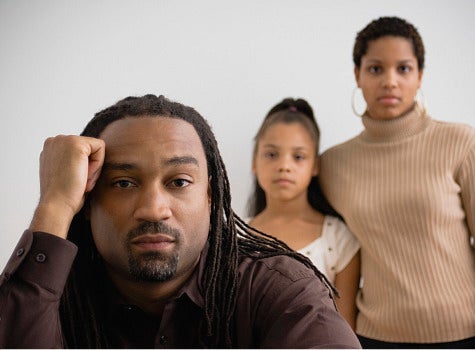 While Lanae and Calvin Conrad, both 34, are on the same page about most things, their parenting styles differ tremendously and discipline, in particular, remains a thorny issue. She’s a disciplinarian who spanks, while he’s a “let’s talk it out” type of father. They shared their story with ESSENCE.com and let parenting expert Ann Pleshette Murphy weigh in: Calvin said: “I was raised with parents who had boundaries but also allowed me to discover the world around me. They never spanked me…okay, maybe a few times, but it wasn’t their only method of disciplining. When I had a daughter, I told myself that I would raise her with the same principles. Instead of spanking her, I try to reason with her so she can recognize what she is doing wrong. In a way, I don’t want her to know what it’s like to be hit by a man. Call me crazy but I’m already thinking along those lines.” Lanae said: “I grew up in a single parent home with a strict mother who spanked me. With our daughter, I find I’m the same. If I say do something once or twice, the third time, my voice is going way up and she’s getting a spanking. I feel like I have to be on the defensive around my husband because I’m stricter. On a few occasions, he has stopped me from spanking her and that really bothers me. My husband knows I have the same intentions as he does. I’m not trying to scar her for life, I just want her to be clear about the difference between acceptable and unacceptable behavior.” Ann Pleshette Murphy: “It’s clear that you are both loving, thoughtful parents. And as you have learned — as together and like-minded as you may have felt before your daughter arrived, becoming parents ties us to our own childhoods, especially to memories of how our parents disciplined us. But the fact is, there isn’t a one-size-fits-all approach to discipline. Some children are better at controlling their impulses and only have to be told once what to do (or not to do). Others get so engrossed in what they’re doing, they appear ‘parent-deaf.’ “The key is to sit down together and talk about your daughter’s unique personality. It’s helpful to reflect on your daughter’s strengths, because you’ll probably discover you’re on the same page about a lot of things. Next, talk about the behaviors you want to change or improve. Try to be as specific as possible, because you can’t correct everything at once. Next, talk about some of the disciplinary tools you’ve employed in the past and whether they have been effective. There is no question that a swat on the behind may stop misbehavior in the short term, but research has demonstrated that spanking does not do much in the long term. Calvin, come up with some rules and consequences that you explain to your daughter and that you consistently reinforce. ” The most important thing to keep in mind is that you guys don’t have to parent exactly the same, but that you do need to work as a team when it comes to discipline. Ann Pleshette Murphy is the Parenting Contributor to “Good Morning America” and the author of “The 7 Stages of Motherhood: Loving Your Life Without Losing Your Mind.“