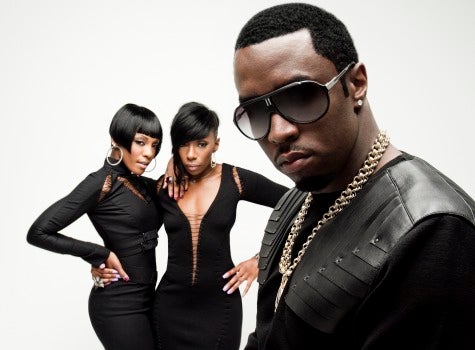 Sean “Diddy” Combs is the master of reinvention. He has cast himself as Puff Daddy, the musical genius who helped curate the ’90s Hip Hop Soul movement starring Mary J. Blige and Jodeci. He then transformed himself into Puffy, the Bad Boy, who would change the music landscape along with artists The Notorious B.I.G., Craig Mack, Faith Evans, Total, and 112. Then he morphed into the Sean John mogul who would conquer fashion and fragrance. He has starred on Broadway, won the Council of Fashion Designers of America Award, stolen the scene in “Get Him to the Greek,” and broke records on HSN. But at his core, music is his heartbeat and his soul.
Diddy has worked with everyone from Lil’ Kim to Nicki Minaj, Kanye West to Janelle Monae. His latest project is a modern take on the ’90s musical trio. Diddy Dirty Money is collaboration with Mr. Combs, Dawn Richards and Kalenna Harper and they are on the “Last Train to Paris,” riding an eclectic mix of soul, love songs and electro beats.  Diddy gave ESSENCE.com the five-minute lowdown on his latest masterpiece… ESSENCE.com: What was your inspiration for “Last Train to Paris?” DIDDY: Musically, it was from all of my music experiences over the years, starting with Mary J. Blige’s “My Life” and hip-hop soul to the influences of Loose Ends and Guy and just the way Eighth Avenue used to sound, mixed in with the way Faith sounded at four in the morning during Paris Fashion Week. All of those sounds fused into one type of experience, then mixed in my history and my experience with relationships, failed relationships, and successful relationships. So it’s a mix of the love and the music, from Harlem to Paris. ESSENCE.com: How did you come up with concept of Diddy Dirty Money? DIDDY: I said everything I could say as a solo artist. I’ve always felt I was best on a team, I felt my best work and best album was with Biggie, with Puff Daddy and the Family, with Rick Ross. I was always a fan of Loose Ends, BBD, Guy. For this album I wanted it to have my perspective and the female perspective. I’ve always used female vocalists but I wanted to create a sound on it. That’s what Diddy Dirty Money is, it’s a sound with myself, Dawn and Kelenna. It’s a throwback to three member groups. Never in my history have I seen two girls and a guy, so that’s how I came up with that. ESSENCE.com: There are a lot of issues around love, hate, drama, and relationships in the music. Where did that come from? DIDDY: That’s my real life. I have to have love in my life — it’s my weakness, it’s my kryptonite, it’s my cape. The word love is deceiving because it’s dangerous, it’s sexy, it’s edgy, it’s beautiful, it’s angry. It can give you life, but it can also hurt you. I tried to make it as realistic on the album as I could and not just make cliched mushy stuff. I tried to represent love when it was sexy, when it was rocky, when it was provocative, but also when it was beautiful. ESSENCE.com: So Biggie rhymes on “Angels” and you spend a lot of time in L.A. now. What does the song mean to you personally? DIDDY: I can say I had a lot of deaths in my life. From my father, to my grandmother, to different tragedies I’ve been in, to Biggie. I have a belief that I have angels watching over us. I wouldn’t call it a religious belief, but a feeling. I think I’ve made it this far because I’ve had angels watching over me. Whether it’s in L.A. or New York, I’m from Harlem, my father died in Harlem that doesn’t make it better. Biggie died in L.A., I’m in L.A. I think about Biggie no matter what state I’m in. Everything on it was a part of my life. Who I talk to and who holds me down are those angels. ESSENCE.com: What was it like to appear on “Saturday Night Live” with Robert De Niro? DIDDY: It was great. Especially doing the skit and I haven’t been on “SNL” in a long time. That level of live TV can be nerve-wracking but it was fun. I think having done Broadway prepared me to be loose and have a good time. Everybody is seeing some of the first TV performances — they just so happen to be on the big stage. We feel like with every performance we will get better. I’m very proud of the girls as they’re evolving. I think they’re really representing from women of a chocolate complexion, which is not the overwhelming majority of women in music. I think it’s a good message we’re putting out there and it’s a message I’m proud of.