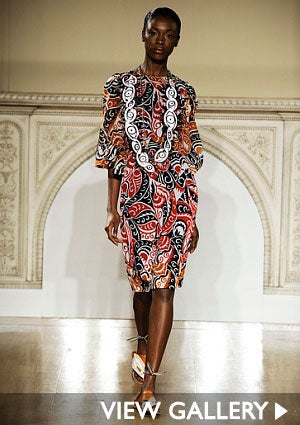 Vivid floral prints and patterned dresses are all the rave for this upcoming spring and the go-to designer for richly hued, mix and match ready-to-wear is the king of prints, designer Duro Olowu. This Nigerian-born print aficionado first caught the fashion world’s attention in 2005 with what’s been coined the “Duro dress”: a silk, kimono-like, wide-sleeved, high-waisted patchwork dress accentuated at the waist, sleeves and hem with a wide contrasting print band. The limited-edition signature dress’s 70’s silhouette in punchy, collages of prints ignited a cult following among celebrities, spawned a heap of copy-cats, and was awarded with the title of 2005’s “Dress of The Year” by both American and British Vogue. But Olowu’s debut collection in 2005 proved that this former lawyer had more up his sleeve than a dress. The collection boasted a total look, from one-of-a-kind accessories to garments in equally exuberant prints. The 2005 London Designer of The Year’s claim to fame was, and still is, the ultra-rich vintage, couture Parisian silks Olowu uses. Olowu’s kaleidoscopic prints may spell bohemian but his tailored silhouettes evoke nothing less than chic sophistication. Olowu’s artistic approach has won him the attention of fashionistas around the world who love color–although he’s been known to convert those whose daily garb is head-to-toe black–and those confident enough to push fashion’s boundaries by mixing stripes, spots and animal skin in one outfit. Women like eBay Style Director Constance White, Fashion PR maven Bonnie Morrison, Supermodel Iman and Chief Curator and Director of the Studio Museum in Harlem Thelma Gooden–his wife–have all been spotted on more than one occasion in Duro Olowu creations. For the last couple of seasons, we’ve seen so much of the tough-girl aesthetic that Olowu’s brand of femininity is a welcome breath of fresh air. Read more: