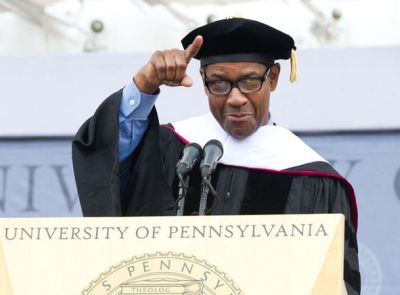 Denzel Washington didn’t just deliver the commencement speech at the University of Pennsylvania yesterday, he also received an honorary doctorate degree from the Ivy League institution. The Oscar winner had lots of advice to dish about being successful and taking risks for the 5000 graduates…

“I’ve found that nothing in life is worthwhile unless you take risks. Nothing,” he said.

Washington also encouraged the students to keep their heads up and remain steadfast despite the occasional failure. “Do you have the guts to fail?” he asked. “If you don’t fail, you’re not even trying.”

We guess this means we’ll call him Dr. Washington from now on.