What happens when Chris Rock, the Blind Boys of Alabama, D’Angelo and a dozen other artists come together for the love of Prince? The best damn tribute to one of the greatest musicians of all time.

Last night, The Music of Prince was celebrated at an annual benefit concert at New York’s Carnegie Hall. Since the series inaugural concert nearly nine years ago, nearly $700, 000 has been raised for music education programs for underprivileged youth.

This year’s musical subject was honored with appearances from D’Angelo, The Roots, Bilal and a (very pregnant) Maya Rudolph and Gretchen Lieberum—performing their Prince cover band Princess—were announced early but the evening’s real treats came from its surprise performances: Chris Rock’s animated reading of “If I Was Your Girlfriend,” ad-libbing in “would he make you laugh, and laugh like Chris Rock?” and Wendy, from Prince & the Revolution, playing bass on “Purple Rain” and later giggling as Princess sang the backwards lyrics from “Darling Nikki.” 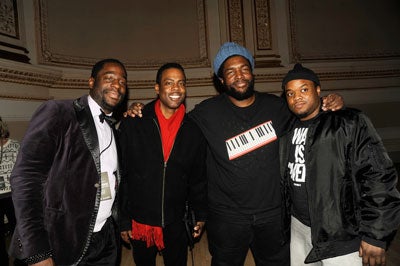 Chris Rock poses with The Roots during the rehearsals for 'The Music of Prince' tribute concert.

Not to be out done, indie darling Alice Smith and her husband Citizen Cope, stripped down “Pop Life”; diva Bettye Lavette made us blush with her take on “Kiss”; and the Blind Boys of Alabama did a fitting interpretation of “The Cross.”

But the night belonged to Kat Edmonson, who’s cover of “The Beautiful Ones” was heavenly, and D’Angelo, who seemed to embody Prince during his rapturous rendition of “It’s Going to Be a Beautiful Night” and “1999.” By the end of the night, shouts of “two thousand zero zero” spilled from the stage to the streets. Yes, the Purple One still reigns.