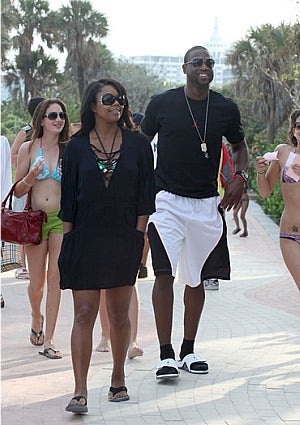 First, the blogosphere began shouting that Fantasia was possibly being sued for “alienation of affection” by her alleged new man’s wife. Everyone said, “Say What?” Yes, in many states a wife can sue the mistress for alienation of affection — which is what former presidential candidate John Edwards’ wife, Elizabeth, recently threatened to do to Rielle Hunter, who mothered the former senator’s child. Now, according to USA Today, NBA All-Star Dwayne Wade’s estranged wife Siohvaughn Wade has filed a law suit in a Chicago court against his actress girlfriend, Gabrielle Union, claiming that Union’s relationship with Wade has caused the baller’s two sons emotional distress. Dwayne Wade released a statement today claiming the lawsuit is “baseless and meritless.” The seven states that still allow wives to sue girlfriends for alienation of affection are Hawaii, Illinois, Mississippi, New Mexico, North Carolina, South Dakota and Utah.
Loading the player...