By Donna M. Owens · Updated December 6, 2020
Niya Kenny had never visited Capitol Hill until last week, yet the millennial found a welcoming space of sisterhood in which to share her story during a Congressional roundtable focused on Black women and girls. “Leading from the Black: How Black Women Lead Even When Ignored,” was hosted by the year-old Congressional Caucus on Black Women & Girls, in tandem with the Democratic Women’s Working Group, and the African American Policy Forum. The packed Dec. 13 event, open to the public, drew a multigenerational crowd, who had the ear of African American women lawmakers during the listening session. Among the guests was 20-year-old Kenny, who gained national attention following a widely publicized police incident back in 2015 at a Columbia, South Carolina high school. On the viral video, a White deputy was shown yanking a Black student from her desk and tossing the teen across the room following a classroom dispute with a teacher. Kenny protested the officer’s aggressive manner towards her classmate and filmed the drama on her cell phone as it unfolded. She was arrested soon-after. “I sat in handcuffs for an hour and was taken to an adult jail,” the young woman tearfully told the attendees of the forum. Kenny and her classmate were both charged under South Carolina’s “disturbing schools” law which criminalizes such behavior as loitering or acting “obnoxious.” In 2016, the ACLU filed a federal lawsuit (Kenny is the lead plaintiff) related to the statute, which has reportedly impacted thousands of Black youth in the state, some in elementary school. In March, a federal judge dismissed the case, but lawyers are appealing. Kenny left school and later earned her G.E.D. While the charges were dropped, there’s lingering trauma even as she rebuilds her life. “I’m thinking about going to college, maybe an HBCU,” she told ESSENCE, “but sometimes just the thought of being back in a classroom scares me.” Rep. Bonnie Watson Coleman (D-NJ), who co-chairs the Black Women & Girls caucus with Rep. Yvette Clarke (D-NY) and Rep. Robin Kelly (D-IL), said they convened the event to hear such stories and take steps to address the issues behind them. “Black women have long been on the forefront of change and progress in this country,” said Watson Coleman. “Sadly, we are so often left on the sidelines of critical discussions and policymaking that disparately impacts us and the communities we support.” 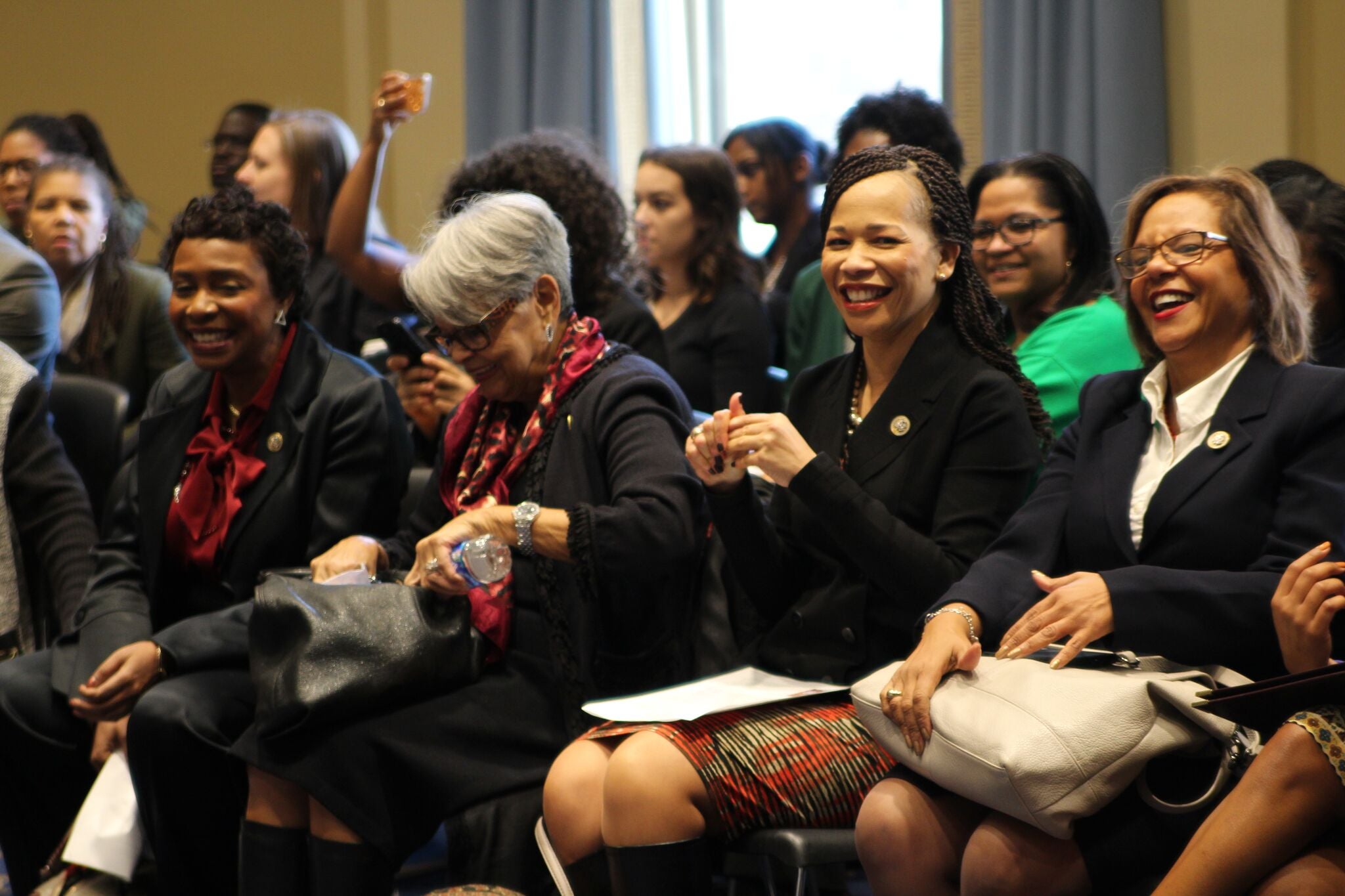 The wide-ranging dialogue — moderated by Dr. Kimberlé Crenshaw, a law professor and executive director of the African American Policy Forum in New York — explored a range of topics. They ran the gamut from Black women’s health care access, to the #MeToo Movement around sexual harassment and the history of assaults on Black women’s bodies dating back to slavery. The panel included several legal minds: Barbara Arnwine, attorney and president of the Transformative Justice Coalition; Tanya Clay House, an attorney and consultant who formerly served in the U.S. Department of Education; and Ifeoma Ike, attorney and a co-founder of the #SheWoke Committee, whose advocacy helped lead to the creation of the caucus on Black women and girls. Rounding out the group of experts were activists and advocates: Janaye Ingram, who oversaw logistics for the Women’s March, and Dr. Avis Jones-DeWeever, Editor-in-Chief of Black Women in the U.S. 2017, a report released in tandem with the Black Women’s Roundtable. There was also discussion of the key role that African American women voters played in Democrats’ winning a U.S. Senate seat in Alabama this month, and the importance of carving out a collective policy agenda for the midterms and 2020 presidential election. To that end, Rev. Leah Daughtry (who served as CEO of the 2016 DNC Convention Committee) told those assembled about plans for the inaugural Power Rising Summit, a Black women’s conclave slated for February 2018 in Atlanta. “It’s time for us to have our own convention,” she said. The event closed with the other lawmakers present – among them, Reps. Barbara Lee (D-CA), Gwen Moore (D-WI), Sheila Jackson Lee (TX), Terri Sewell (D-AL), Brenda Lawrence (D-MI) and Lisa Blunt Rochester (DE)—vowing with the caucus to commit themselves to minimizing and eliminating barriers for Black women and girls. “I’m already thinking about future legislation,” said Congresswoman Jackson Lee.