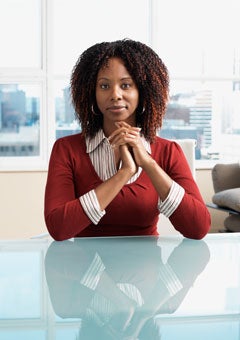 If I had been asked as a teenager what my life would look like in my mid-to-late twenties, I would probably have painted a somewhat different picture than what I have going on right now. College grad? Check. Living in New York? Check? Cute boyfriend? Check. Financial stability, a fabulous career and the ability to travel the world? Not so much…

It isn’t that I’m too young to have achieved big things at this point in my life; many of my girlfriends have zoomed past me in terms of professional success, some making big waves in their field and others, simply finding a way to live comfortably doing what they love. And, to be entirely fair, it isn’t that I haven’t done anything of merit; my writing has been featured in a number of great places (including, you know, Essence Online) and I’ve even won a few awards for it.

But I’m just not… settled. Stable. Comfortable. In fact, I’m the opposite of comfortable. You know the feeling of having a little rock in your shoe and you can’t stop and get it out? I’m that, all the time.

It’s difficult for me when my girls go off to Jamaica for a weekend in the sun and I’m stuck back in Brooklyn, or even when they do something as small as shopping for new purses and I’m left just smiling and saying “that’s cute” as I leave the store empty-handed. And I hate fielding phone calls from my parents when I have to explain that I’ve just barely made ends meet for the month, as opposed to making them feel good about how I’m doing far from home (or, better yet, sending money back to treat them to something nice).

Yet, with all of that said, I have had to realize that Jamilah’s path is Jamilah’s path and it isn’t going to be the same as my homegirl from way back, who knew for years that she wanted to be a lawyer, or my friend from college who literally landed my dream gig by accident. And it certainly isn’t fair to pretend that for all my baller girlfriends, that there aren’t others who are struggling to find their way just as I am. People aren’t set in their careers at 21 anymore, and an increasing number of folks find themselves in their late 20s or 30s before things start to make sense. I tell myself this once in a while. Okay, daily.

It doesn’t matter if you are 26 or 56, or even if you’re at the top of your field, there will always be someone doing a bit better than you. This has been a hard-learned lesson for me, but I realize that measuring my success by some other writer or by a friend who is doing something completely different, I only do myself a disservice. I’m not naive enough to say “My day will come, because it has to,” but I believe that it will because I’m working hard to make things happen.

Comparing yourself to someone else, be it professionally, physically or otherwise, is rarely a winning game. All things are rarely equal and it would be impossible to find someone who has had the exact same walk as you’ve had. While many of us may have internal deadlines for when we want to have this or do that, we can’t rightly say that another person’s timeframe has to be our own. Let the successes of others motivate you to meet them at the top, but never feel like you’re meant to be stuck behind. Get off your girlfriend’s schedule and focus on your own!