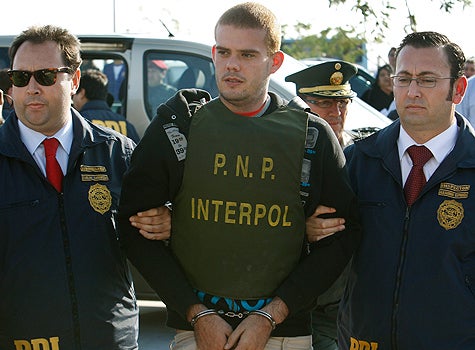 I woke up this morning and wanted to throw a brick at my television! The target, that little creep Joren Van Der Sloot, the sole suspect in the murder of Natalie Holloway. Last night, I rushed home from a fabulous event to finish this piece on Joren’s latest despicable act: murdering Stephany Flores, the daughter of a former Peruvian presidential candidate. When I woke up this morning, a different story had emerged, I scrapped that article and went back to the drawing board. I don’t want to sound insensitive; I get another crack at my article, but he has taken these young girls’ lives forever. The real tragedy of this most recent story is the murder is more heinous than originally described, ergo the imaginary brick I aimed at his head. When he confessed earlier this week, Joren told authorities that he killed Stephany because he caught her going through his computer. She allegedly found an email that linked him to the Holloway murder, they argued, she slapped him, he grabbed her neck and killed her.  As of this morning, the police have a different account of Stephany’s death. The Associated Press reports that he brutally killed Stephany when he “smashed in her face” then strangled her in his Lima hotel room with his shirt.  He took her money and her car keys. After he killed her, left the room and went out for coffee and doughnuts! He then ditched her car, took a cab to the border of Chile, was eventually captured and extradited to Peru. The police paint a gruesome picture of a despicable serial killer. The Peruvian police report allegedly contains a psychological evaluation that describes Joren as an “anti-social, psychopath, a cold and calculated killer, who premeditates everything. One who acts with great cruelty, reacts with great violence and lies too much”.  Every detail that has emerged in each of these cases indicates that this evaluation is spot on. Lying is something that Joren seems to have down to a science. For years, he’s told conflicting stories about Natalie Holloway’s disappearance, ranging from he left her drunk on a beach and never saw her again, to she fell and hit her head on a rock and died, then he and his friends disposed of her body in the ocean. Last month, he contacted Natalie’s mother, Beth Twitty, through her attorney and offered to give her information about her death and the whereabouts of Natalie’s remains in exchange for $250,000. Mrs. Twitty advanced $25,000.00 and flew her lawyer to Aruba to obtain the information. Joren told her lawyer that his father, now dead, buried her body in the foundation of a house in Aruba after he accidentally killed her. Of course he lied: the building permits show there is no foundation at the house that was eventually erected, but even more interesting, aerial photographs show that the house was not even under construction at the time of Natalie’s death. Mrs. Twitty rolled the dice: at best she would have the long sought after information regarding what happened to her daughter; at the very least she would have enough information to charge him in the States with attempted extortion. What she got instead was blood on her hands. Joren took the $25,000, fled to Peru and killed Stephany Flores exactly five years to the day of Natalie Holloway’s murder. The police say that Joren targeted Stephany for her cash, I do not disagree, but the murder also seems to be an intentional thankless anniversary gift to Mrs. Twitty. This morning, the Police charged Joren with first degree murder, and true to form, Joren has offered to give information to the Arubian authorities regarding Natalie’s death. What happens next remains to be seen, but the similarities between the two murders are striking: each young woman, late teens/early twenties, partying and gambling in casinos with Van Der Sloot, ultimately ends up dead. In the Flores case, the police have a body and a confession; in the Holloway case, they have neither….at least not yet.