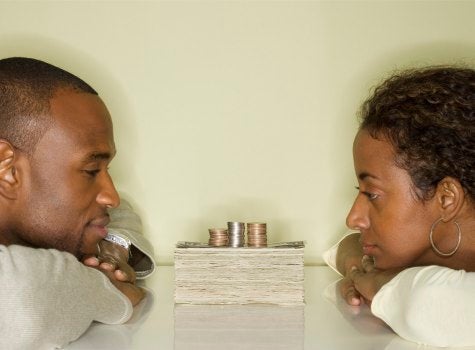 Although I don’t know your man, between you and me, I can share with you one thing I know for sure; if your money is always funny, you can forget anything long-term. Let me be clear — we have all been through seasons of living check-to-check. There are some who, because of being the breadwinner for their children or caring for loved ones, have been stretched thin. There are those who are between jobs, starting a new business, or are in school. I get it. I’m not talking about that. I’m talking about those whose unfocused priorities consistently leave them having very little to show for the money they’ve made. I’m referring to those whose accounts are on E because they make poor choices, not because they are in transition. 1. Broke attracts broke We have all heard the expression; birds of a feather flock together. Like attracts like. Broke attracts broke. People connect based on things they have in common. You either see in them a quality you have that you share or you see what you would like to have and admire about them. The only man who observes your constant turmoil and still pursues you is the one who is also broke. He sees a kindred spirit in you and concludes, “We’re a good fit. I’m in.” I suppose he takes comfort in there finally being one person who won’t be able to chastise him about his bad spending habits. 2. No money = No power The “Golden Rule of Business” is he who has the gold rules. This holds true in many of today’s relationships. If the only reason he puts up with having to pay for everything is because you have pretty eyes, a nice body and the sex is good, congratulations, this is called whoredom. You exist to please his physical needs and that’s it. He has zero interest in anything greater. He will use his money to control you, knowing that he is your ticket to a bill getting paid or a lifestyle that you otherwise couldn’t afford. You’re better than that. You have to love yourself more than that. By the way, once the sex gets old and the mystique surrounding you diminishes, that’s it. You’re done. He will cut you off and find another woman to conquer. Ask around. It happens all the time. 3. False Advertising As a successful man, I know the difference between quality and an imitation. I can spot a woman who looks like a dime but I know only has pennies. Instantly, I lose all attraction and respect. It’s obvious that she spends far more time on her outside than she does developing her inside. I know that the way she spends her money is the way she would spend “our” money if we ever hooked up. While money isn’t everything, it is among the top two causes cited of all divorces. Step outside of yourself and ask, “Would a man of means want to be with a woman who takes away from his situation more than she adds?” Turn the tables around and think about how you would feel if you were in his shoes. It’s time for a turnaround, starting with your bank account. The next time you’re at the register and they ask, “Will this be cash or credit,” tell them, “Neither” and deposit the money you were about to spend.

Motivational speaker and author of “You Were Born an Original, Don’t Live Like a Copy,” Jonathan Sprinkes is known for always “keeping it real.” He encourages corporations, student bodies, and individuals to always strive for the best.