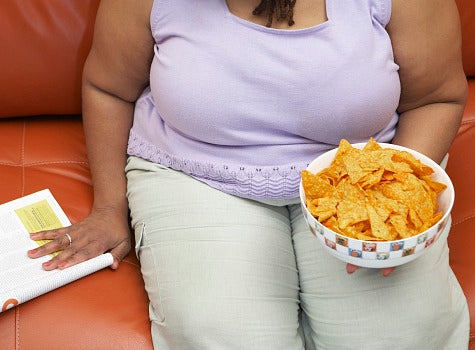 When her mother died of complications related to obesity, Darlene K. Drummond remembers having to reconsider her weight issues. At 5″3″ she weighed 245 pounds with a body mass index of 45. But she still put off seriously tackling her weight until a doctor diagnosed her as morbidly obese, with diabetes, high blood pressure and sleep apnea. Like Star Jones, Drummond says she kept her gastric bypass surgery a secret because she didn’t want the negative comments from people she knew. Seven years later she’s written a book about her experience, A Diary of Gastric Bypass Surgery and she’s lost nearly 100 pounds and has never felt healthier, despite the haters. In her own words: My mother passed away in January 2002. She had always struggled with weight issues and died because of complications due to her obesity. Before her death she spent a lot of time encouraging me to lose weight as well but I thought it was something I could always put off because I was too busy with my career. I’m 5″3″ and, at that particular point in my life, I was 254 pounds with a body mass index of 45. I already wasn’t feeling well and had a sense that I was pre-diabetic so after my mother died I went to my family doctor to find out exactly what was going on. I took a test and, of course, I had diabetes, and high blood pressure, and gastric reflux, and sleep apnea. Whew! I cried as I walked out my doctor’s office with three different types of medications. She was the first person to mention the operation and recommend a respected surgeon to me because she knew how much I had been trying to lose weight. I remember sitting in the surgeon’s office thinking, ‘I’m not as fat as the people in here.’ Then I thought, somebody’s probably looking at me and thinking, ‘Wow, she’s fat.’ It took six and a half months of consultations before I had the surgery. On that day, I remember being wheeled into a room at 7:25 a.m. and waking up three hours later, feeling very weak. For days I couldn’t even walk to the mailbox without feeling like I was going to die, but the good news was within a week I no longer had to take medication for my diabetes and hypertension. I lost 20 pounds within the first two weeks. A lot of people think you lose a lot of weight drastically but the first six months are the most important months for weight loss then after that it gets very difficult because your body plateaus, even when you’ve had gastric bypass. I was on a liquid diet for about two months and by the time my nutritionist reintroduced me to solids my stomach was only three ounces so I would be lucky to get a couple of pieces of food in. And my tastes changed. I’m a Southern girl who used to like my grits, eggs and bacon in the morning. For years after the surgery the sight of eggs would make me upchuck. Really, most of the things that I loved I could no longer stand. My family was very supportive of my surgery but I can relate to Star Jones in that I also kept it a secret because I didn’t want to hear the negative talk. When I admitted to having had gastric bypass to certain people I would get comments like ‘Why would you do that? You know the only thing you have to do is push back the chair from the table.’ I also noticed a change in some of my colleagues. I think as long as you’re the fat one in the group no one is really threatened by you but the minute you lose weight they start being competitive. That made me very uncomfortable. I now weigh 150 pounds and am the healthiest I have ever been in my life. I try to eat right six days a week and give myself one day to eat whatever I want. I feel very good and I’m very happy. It’s been seven years since I had the surgery and I’ve kept the weight off, which is amazing because most people gain the weight back, so I feel good keeping the majority of the weight off. Darlene K. Drummond is an educator and author of A Diary of Gastric Bypass Surgery. Read More: