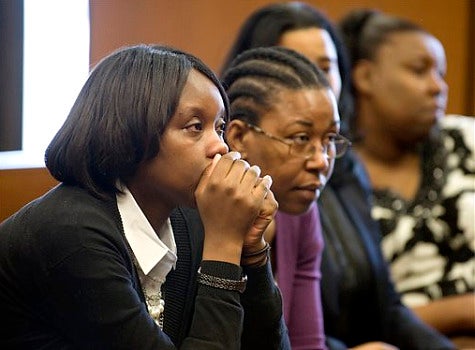 Gatane F. Borders, a certified school psychologist writes about 23-year-old mother Venetta Benjamin (pictured above), whose 3-month-old baby was kidnapped by the child’s father and thrown off a New Jersey bridge. This past Monday should have been a day filled with joy for young mom, Venetta Benjamin. It was the day that the 23-year-old mother was to have taken her 3-month-old daughter, Zara Malani-Lin Abdur-Raheem, to the doctor for a check-up. Instead of experiencing this exciting milestone, Venetta grieves because a week ago her estranged ex, Shamsid-Din Abdur-Raheem, abducted the baby and confessed to throwing the infant off a bridge into the icy waters of the Raritan River in New Jersey. I spoke to Venetta for an exclusive radio interview this week to hear her side of the story. The conversation was quite moving, but also surprising at times. Clearly fatigued, Venetta candidly talked about the day that forever changed her life. She shared that she was in route to get a temporary restraining order when she received the call from her sister to go back home. She describes the scene in the car as she spoke with the police. “He’s gonna kill her! You gotta find her…you gotta find her!” she screamed through the phone. When I asked her if Abdur-Raheem had previously threatened Zara, she replied softly. “Well, yeah, he made threats to me. [That’s] the reason why I was getting [a restraining order]. I [told] my sister..he’s around here. I know he’s up here. Things like that happened before where we got into it and he would show up at my house. And when I leave out by myself he would come out of nowhere.” Despite the violent crime with which Abdur-Raheem has been charged, Venetta stressed that she is not interested in dwelling on the legal aspects of this case. “I’m not focused on prosecuting Shamsid-Din or anybody else who was an accomplice to him. I just want my daughter to be found. I’m not worried about whether or not someone’s gonna pay for this. I don’t have vengeance in my heart. People make mistakes. People do bad things and they make mistakes. In the Bible.. like(sic)..people have to forgive people. As [long] as you do something to repent, that’ll be something good.” New statewide Amber Alert guidelines are now under consideration and would lift some of the current restrictions on issuing an alert when a parent abducts a child, the state Attorney General’s Office said today. Although Venetta properly reported the abduction, the State Police never issued an Amber Alert until around 8 p.m., nearly four hours after the abduction. As Venetta stated during the radio show, “I never thought that my life would be this way, but this is what is happening to me…and it hurts so, so much. It could be anybody’s child. Look at me! I would have never thought that this could have happened to me. But it did!” The reality is that just under 45% of all children reported missing are African American. Far too frequently, they fail to receive the Amber Alert even when all criteria are met. This is a fact that 12-year-old Jameshia Conner‘s family know all too well. She had been missing for two weeks this past winter when her badly beaten body was found in an alley in Chicago. Sadly, reports indicate that she had been alive the day prior to her murder. Hopefully, the guidelines will change, and there will be a more unified and systematic way of issuing such needed alerts. Parents are also urged to learn what key things that they should do if their child goes missing. Knowing these steps can possibly change an outcome: Venetta and other loved ones hold out hope that they will once again be able to hold their beautiful baby girl. However, the Attorney General said in a press conference last week that “the end of the story is going to be a very, very tragic one” and that the authorities had “received some corroboration.” No other details were released. We can only pray that the ending will be different.
Read more: https://www.essence.com/news/commentary_2/commentary_venetta_benjamin.php#comments#ixzz0gejZ4Rhs
Leave your condolences here for beautiful Zara.