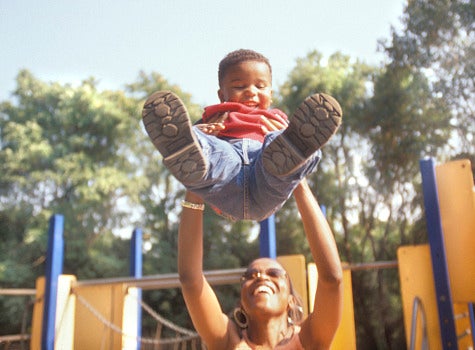 Just one month before teacher and blogger Britni Danielle was due to give birth, her man was incarcerated. Now three years later, she writes about the struggles and triumphs of being a single parent and raising an African American boy whose father is incarcerated. The first time my son met his father was in jail. Blistering cold out, I wrapped my almost two-month-old son in a baby-blue snowsuit, and a hand knitted blanket and walked to the train station. We took the E train in Queens, New York then transferred to a bus that would take us to Rikers Island. When the bus crossed the bridge onto Rikers Island, I didn’t know what to expect. Even though I was somewhat of an around-the-way girl and had cousins who had been in an out of the prison, I had never set foot in a jail. My experience with jail was only what I’d seen on “Law & Order,” and from the looks of the show, Rikers was like the ninth circle of hell. When I got off the bus gripping my newborn son, I didn’t know I’d have to go through three sets of metal detectors, leave everything I carried for the baby–except for a blanket–in a locker, remove my shoes, shake out my bra, and take off my socks just to spend an hour with my beloved and introduce him to his son. It was a humbling experience, and I never wanted to do it again, but it’s been three years, and this is our life…for now. Raising a child is an arduous task. Raising a child alone is even more daunting. Because his father is away, I am in the precarious situation of being a not-so-single, single mother. Although his father tries to father our son through visits, phone calls, and letters, he is not able to be with us on a day-to-day basis, which means it’s up to me. I never planned on being a single mother. When my beloved was locked up, we were a week away from ushering our son into the world. We had bought all of the necessities, celebrated with two baby showers, and were happily awaiting his arrival. One night, our lives changed in an instant, and I was thrust into the difficult role of being another single, Black girl with a baby. When my son was first born, I vowed that even though he was being raised in the absence of his father, he wouldn’t want for anything. I have made it my mission to give my son every advantage, every opportunity, and every indulgence that is feasibly possible. And even though we now live 3000 miles away from his father, I have made a conscious effort to keep our family intact and make sure we see him as much as humanly (and financially) possible. Even at three, my son knows both his mommy and daddy love him fiercely, and he is happy. Solo-parenting my son has been both rewarding and very lonely. When we venture out to the park or to the movies or anywhere and see complete families, a hint of sadness curls around my heart because I am reminded of what is lacking in our life. Although beloved and I are together, I am still the one parenting our son alone, making sure he doesn’t feel as though he has missed out on anything just because mommy’s raising him by herself. Since becoming a parent, I’ve become acutely aware of how I’m viewed, and have gone out of the way to make it known I’m not the stereotypical single mom. Even though single parents are raising more children, there is still a huge stigma that looms above our heads. And for Black women, it’s even worse. I am not your stereotypical single mom. I have both a Bachelor’s and Masters degree, I’m a professional, and I make a decent living. I am not on welfare, I’m not out having multiple babies by multiple fathers. I am young, Black, gifted and a mom. As my son grows older and becomes more aware of his father’s absence, I know I will have to explain the situation and reiterate that he is loved truly, deeply, and completely by both of us. He will have questions, and I pray we will have the answers. But for now, I am enjoying having my son all to myself. I am blessed to experience all his funny faces, silly dance moves, and I loves yous and not feel selfish one bit. Britni Danielle is a Los Angeles based writer and teacher. She is the author of, ThisSideoftheWall.com, a blog that chronicles her struggles and triumphs as she raises her son alone. Read More: