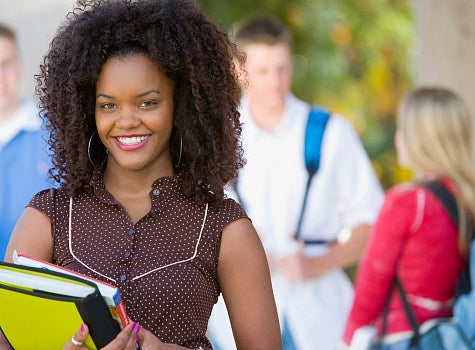 When it came time for my daughter, Elenni, to go to college, although I’d hoped she’d choose Spelman, I was thrilled she settled on Buffalo State College. My fierce, funny and feisty daughter cited the school’s affordability, and at the time she enrolled, its president, Dr. Muriel A. Howard, was a Black woman. However, it was her choice of pledging a non-Black sorority, Sigma Delta Tau (nope, I didn’t mean Delta Sigma Theta), that was the challenge for me. Deep down I had hoped Elenni, 20, would want to join and bond with her sisters in a Black sorority. When I attended New York University, being in a sorority never crossed my mind. As an artist I celebrate individuality. But when my daughter declared she wanted an “authentic” college experience, complete with pledging, I gave her my full-fledged support. When she excitedly announced she was joining SDT last year, she raved about the group’s high GPA, community service and social standing. If she was happy, I was happy. That changed when I visited her on campus and saw–really saw–her SDT sisters and the sea of White faces surrounding my little brown girl. It shook me. Would her sorority sisters give her the same emotional support and spiritual connection as the Alpha Kappa Alphas or Zeta Phi Betas? Though sorority life wasn’t for me, that doesn’t mean I don’t see its value. Growing up in D.C., I understand the powerful sisterhood of Deltas, AKAs and Sigma Gamma Rhos. I wanted Elenni to tap into that source. Then I had to understand that my daughter has her own power source. Elenni and my activism were raised together. From toddler to teen, she ran the halls of ESSENCE, Vibe and Honey, where I have worked as an editor, encouraging Black women to live fabulously and fearlessly. Through it all, Elenni was either sitting on my lap or waiting in the wings soaking it all in. Her break from my and so many of our expectations illustrates that each generation of Black women continues to grow in her sense that she belongs anywhere, including a non-Black sorority. As mothers, we must remember that our girls are living in a time when the image of a Black mother running the White House is awesome but also natural. We prepared Elenni and her peers for this change. Unfortunately we didn’t prepare ourselves for the consequences of their growing up in a world with far more choices than we had. I never imagined my daughter calling a group of White girls her “sisters.” I had always considered White women “other,” and sisters to me was synonymous only with Black women. From that first moment of seeing the women of SDT together, it was a challenge for me to envision my daughter on the yard with sisters of all colors. But looking back now, I understand that Elenni is acting out of tradition. What a blessed irony that the closest person to me, my sweet brown treat from the Almighty, trusts that her strong roots can hold her up anywhere she chooses. Michaela angela Davis is a cultural critic, writer and public speaker on race, gender, fashion and hip-hop.