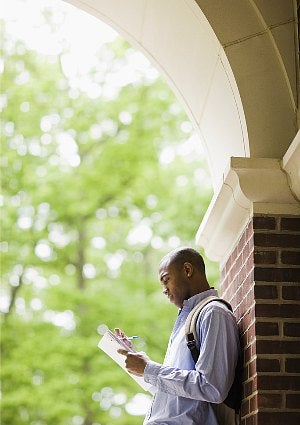 You did it! You got your son, grandson, nephew, cousin or family friend off to college. For many, this is a dream come true and the end of an 18-year journey. Think again. Getting the Black man in your life to college is only the beginning. Getting him to graduate is an entirely new challenge. The journal Diverse Issues in Higher Education reports that 67 percent of Black male students who begin college never obtain their degrees… Numbers like these are part of the reason why I have devoted much of my 10-year career to motivating and mentoring students in higher education. I have worked with thousands of students from all backgrounds and ethnicities. Although I don’t claim to have all the answers, I have seen enough success stories to know one thing for sure: his support system is critical. Although you won’t be checking his homework anymore, you can still help him by creating an environment that cultivates his achievement on campus and in life. Start doing this immediately: START: Exposing him to BOTH sides of the possibilities. Create a list of jobs and salaries from which he can choose when he has his degree. Make an alternate list of hourly jobs and salaries that he will be stuck with should he choose to drop out. STOP: Offering a Plan B. Actor Will Smith said, “Plan B only distracts you from Plan A.” If you tell him, “Baby, if things don’t work out in college, you can always come back home,” there is a high probability he’ll take you up on that offer. Lovingly share with him that living with you is no longer an option. Focus your energy on him finishing, not giving him an escape route. START: Teaching him about leadership and personal development. Upon graduation, he will be expected to lead at work, in civic organizations and in his family. Especially if he comes from a female-led home (as I did), it is imperative that he learns how to step up and not be satisfied with allowing women to do all the work while he passively watches. Celebrate every occasion he takes the initiative on. Create a tradition of discussing self-help books that promote positive thinking and leadership. STOP: Expecting him to “figure it out on his own” what manhood is about. Mass media provides a grossly distorted image of how success and power should be handled. The personae of rappers, athletes and entertainers are our most dominant images of American Black men. Unless you want to raise an over-sexed, self-centered tyrant of a man, expose him to a constant stream of positive counter-examples of historical figures and current Black men who use their influence responsibly, for the betterment of society. START: Transitioning your role from parent to coach. For better or for worse, you have put it in him whatever you can to make him a successful man. Your job as his primary caretaker is now over. Now, you need to step back, stop telling him what to do, and start asking him how he is going to solve his own issues. Let him be a man, not your “baby boy.” STOP: “Helicopter parenting.” The entitlement that this generation has become known for is a result of parents refusing to let their kids experience the hard knocks of life. Camille Phelps, Dean of Students at Southeastern Oklahoma State University, has noticed a power struggle that has evolved between parents and male students. “He wants to show her that she [mom] can’t control him anymore. Some will even stop answering text messages as a way to exert their power.” Support him emotionally, but resist the urge to keep him from making his own mistakes. Thus he can learn his own life lessons and gain the confidence he will need in the real world. The challenges facing Black men in college are great, but even greater are the opportunities available to them when they finish. You play a vital role in the success or demise of his college experience. Take advantage of this chance to develop a strong Black man who has the fortitude to succeed, despite the odds. If he’s going to be a number, teach him how to be number one.

Motivational speaker and author of “You Were Born an Original, Don’t Live Like a Copy,” Jonathan Sprinkles is known for always “keeping it real.” He encourages corporations, student bodies and individuals to always strive for the best.