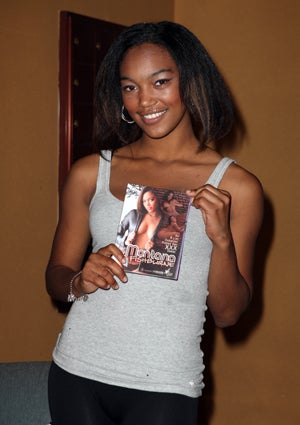 For several years now, I’ve been contemplating what exactly would be The Effect, if any, of making celebrities out of women — like Paris Hilton, Nicole Richie and Kim Kardashian — who had done nothing worthy of being celebrated at the time they became celebrities. Sure, each of them has now had a TV show, a clothing or shoe line, a personal scent, or all of the above. But what led to that wasn’t much more than being pretty, showing up designer-clad on the right red carpets, behaving badly in public and most important of all, having a fairly recognizable last name. Enter Montana Fishburne, the 19-year-old daughter of Laurence. Daddy’s dearest (and his spitting image) is releasing her self-titled porn DVD this month. The subtitle? “An A-List Daughter Makes Her XXX Debut.” And the catalyst? “I view making this movie as an important first step in my career,” said Montana. “I’ve watched how successful Kim Kardashian became and I think a lot of it was due to the release of her sex tape. I’m hoping the same magic will work for me.” When I read that quote the first time on TMZ, I gave a blank stare to my screen. But then, after thinking about it, I got how Kim Kardashian could be a role model.   See, every time Kim Kardashian flutters an extended eyelash or pokes out a curvy hip, the whole world watches. Even those of us tuning in just long enough to roll our eyes. Due to an overwhelming interest in her, she’s one of the most popular women in America. If we are in high school, likely where Montana Fishburne just left, Kim Kardashian — love her or hate her — is the captain of our cheerleading squad times the homecoming and prom queen combined, then multiplied by, like, a Clueless billion.* And on top of that, she didn’t have to do much to get what appears to be a pretty great life filled with fabulous clothes, hot men, and lots and lots of attention. Her big break was backing it up so-so on Brandy’s brother for the camera. And look what it led to.   When we started giving our undivided attention — positive and negative — to people without the talent to deserve it, we gave credence to The Kim Kardashian Come Up and all of her imitators including, but not limited to, Montana Fishburne. (Just check Rude.com or My Booty Space, sites full of young women seeking their big break on their back — or knees.) As much as we’d all like to say that Montana’s goal of launching herself into celebrity via porn is deluded, I’d argue Little Black Girl Lost doesn’t need a MapQuest to find the Road to Good Decisions as much as we’d like to think. Sure, doing a porn sounds nuts — I have to say that so you know I’m not endorsing her decision — but I’m writing about her, you’re reading about her and enough people are anticipating her performance that her DVD got an earlier release date yesterday morning. By giving her our attention, even our outrage, we’ve also re-confirmed her outlook that you can become a household name “just” by frolicking on a FlipCam. Expect to see a lot more of her, and a lot more women like her, in the future.     *for the record, I don’t knock Kim Kardashian’s hustle. I do knock our collective gullibility to be hoodwinked by a big butt and a smile. Have we learned nothing from BBD?