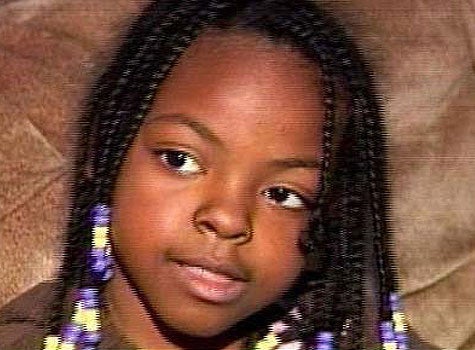 When I first heard the story about a female schoolteacher in Milwaukee who cut off a first grader’s braid, my first thought was: Wow. That’s crazy. I didn’t know much of the facts surrounding the story, but it begged examination. Because of where it happened and what was cut, I figured the victim was probably a little Black girl. And though it didn’t really matter, my South Texas-raised self couldn’t help but wonder if a white woman held the scissors. The teacher, who was reportedly “frustrated” because the child kept playing in her hair, was fined $175 for the offense and still kept her job.

Breathe in… breathe out…

But then, I saw the little girl’s face. She is little, you know; a seven-year-old pretty brown baby named Lamaya Cammon with long hair, corn-rowed, the ends threaded with purple and yellow beads. “[The teacher] said stop playing with your hair,” Lamaya explained in her news interview. Cut to Lamaya running her fingers through her braids as the beads go click clack, click clack. The child says the teacher ordered her to come to the front of the class and then admonished her by cutting one of her braids. Cut to close-up of the lone, cut-off, beadless braid in the front of the child’s head. “What did you do?” the newscaster asked. “I went to my desk and cried,” Lamaya said. “And they was laughing,” she added, referring to her classmates, as if that was worse.

Somebody call the law. Call Supernanny. Call somebody. Because when did scalping a child become the new classroom corporal punishment? In my day, punishment–by which I mean school-mandated physical discipline for unacceptable behavior, often at the teacher’s discretion–meant getting “pops” or “swats.” Remember? The teacher invited you outside the classroom, told you to bend over and whacked your backside with a thick wooden paddle. The student returned to their desks smirking or red-faced. Some, humiliated, put their heads down and cried.

Again, the matter isn’t really about race or hair, but let’s just get them out the way. In Black girl land where I’m from, cutting someone’s braid off is grounds for catching a major ass whooping. And call me new age but doesn’t the act of vindictively cutting off someone’s hair just feel like all kinds of cosmic violation? What’s next? Chop off a foot?

That the teacher offered the excuse “frustrated,” which is essentially passing blame, and still has a job, is deeply problematic. I don’t care if Lamaya jumped on said teacher’s desk, shook her head dancing and shaking a cowrie-shelled calabash, the teacher was wrong. Both of my parents are educators, and I remember my mom recalling many a hellish school day at the dinner table. When her fifth grade students were rude, my mom often wanted to slap the taste out their mouths. She didn’t actually do it.

I just keep thinking of stories I’ve heard from several friends about sabotaging, soul-crushing grade-school teachers from their childhoods. It’s an abuse one does not soon, if ever, forget. But hey, maybe the teacher in question is a great educator and merely had a meltdown. Well, then the teacher needs a rest. Suspend her without pay during the investigation at the very least, and make sure she can’t come within 1,000 feet of Lamaya or any other child until she gets a psychiatric evaluation. The teacher’s behavior was juvenile and demoralizing, and her relationship with the school–perhaps even teaching–should be severed. Just like Lamaya’s braid.