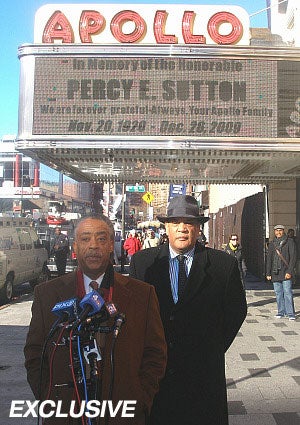 In Harlem’s glorious pantheon, Percy Ellis Sutton, a Tuskegee Airman, was among its most cherish icons.  But his power and influence had a global significance and resonated beyond the corridors of Harlem where he was a highly regarded attorney, entrepreneur, civic leader, civil rights activist, and patriarch of a prominent family. Sutton, 89, died quietly in his sleep Saturday, December 26 in New York City.

As the senior member of the so-called Gang of Four, including Congressman Charles Rangel, former Mayor David Dinkins, and attorney Basil Paterson, Sutton was clearly the ringleader, and that leadership was brilliantly displayed in the field of politics where from 1966 to 1977 he was President of the Borough of Manhattan; in business, where he purchased and renovated the Apollo Theater in the early eighties, which in turn revitalized economic development in Harlem; in the legal arena, where as the attorney for Malcolm X, he provided guidance and counseling for his widow and their daughters after the leader was slain in 1965.

Sutton was also a pioneer in media. In the early seventies he was part owner of the Amsterdam News and about the same time established the Inner City Broadcasting Corporation and its flagship stations WLIB-AM and WBLS-FM.  A few years ago, his imagination and ingenuity undaunted by age, he began a serious inquiry into high technology, hoping to produce the next generation search engine, software/hardware and security for networks.

While emeritus had been attached to his name, Sutton was not content to rest on his considerable laurels. “I’m very excited about this new venture,” he told a reporter of his company, Synematics. “And I feel the best is yet to come.”

It’s hard to believe that he was on the brink of yet another extension of his legacy, but that was the kind of man he was.  His insatiable appetite for life and adventure was evident when he was 12 years of age and ran away to Harlem from his home in San Antonio. Even in his youth Harlem was an irresistible attraction, an attraction he surrendered to willingly, and one that ultimately endowed him with the same magnetic quality.