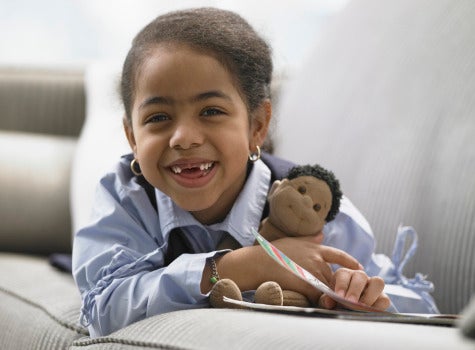 When my daughter was 5, (she is now 22), we happily marched into a national toy chain to look at dolls. As we gazed at the towering rows of brown, black, and white dolls, I naturally put my hand on a stunning brown doll. My daughter looked at me like I had lost my mind, and picked up a white doll saying, “Uh,uh, I want this one. She’s prettier”. I was crushed. As I put her doll back and held up my choice of a brown doll to my brown skin, I said, ‘Oh no, see her skin is beautiful and  brown, just like Mommy’s”. Without any drama, she said okay, and I only bought her brown dolls from that point on. Clearly, there are some issues that never change. Part One of a four part special on CNN is focusing on kids and race. Their results may or may not surprise you. The backstory of their investigation was to re-examine the Clark Study, a groundbreaking work done in the 1940’s. That landmark study was commissioned to look at the effects of racial segregation on black and white children. The conclusions were shocking. Black children frequently chose white dolls over black dolls. The Clarks’ research was pivotal in influencing future racial legislation in the United States. You can’t legislate morality however. Fast forward now to a “post racial America” where skin color should not a limitation or a hindrance. President Barack Obama has paved the way for all Americans to trust, accept and promote racial equality. Right? uh, maybe, no wrong. There were three findings from the CNN study that were in Anderson Cooper’s words shocking. The first was that a large percentage of white children have an early bias towards their whiteness. In other words, they clearly see whiteness as a positive attribute and blackness as a negative. Secondly, Black children also (to a lesser percentage) have bias towards whiteness. The third finding was in my opinion the most critical. CNN found that younger and older children keep the same patterns of stereotyping from age 5-10. So, as brain development and maturation occurs, old attitudes are resistant to change. I was pleasantly surprised and very proud of the white and black children who were race-neutral. They clearly articulated the point of content of character over the color of one’s skin. Children are born color blind. As infants, their needs come first. As they grow, their attitudes and beliefs are subject to the influences of media, music, overheard conversations and most importantly, what is learned and said at home about ethnic identity and what it means to be an other. Most black parents either based on their own childhood experiences or adult realizations know that saying it loud, “I’m Black and I’m Proud” is as necessary as enrolling your child in the right pre-school. Many Black parents have gotten the memo. It is clear that white parents need to be as aware of how they are constructing the notion of the “inherent goodness” of whiteness in their children simply by their silence or indifference their view of  blackness in America. By that I mean, not questioning injustices, not highlighting accomplishments or not having any black friends or colleagues in their homes.  As Dr. Spencer, a noted University of Chicago Psychologist and author of the CNN Study stated, we must “reframe our childrens’ experiences”. That can only be done by reflecting and actively being aware of our own. For more “Real Talk” stories by Dr. Janet Taylor, click here.