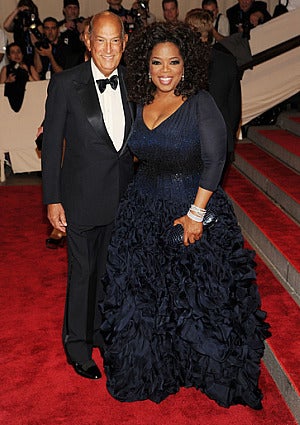 Oprah Winfrey‘s taking a break from the Windy City, kicking it in the Big Apple for a while. The talk show queen hosted last night’s Metropolitan Museum of Art’s Costume Institute Gala Benefit alongside Anna Wintour. She’s also gearing up for her “Live Your Best Life” Walk this Sunday, May 9, in NYC. Meanwhile, if you missed Naomi Campbell in the daytime TV diva’s hot seat, she comes clean about the drugs, abandonment issues and that notorious temper of hers. As the restoration of Haiti and the Haitian people continues, Haitian-born French Professor at Hamlin University in St. Paul, Minnesota, is giving his homeland a special gift, teaching volunteers intending to visit Haiti Creole. [CNN] The 2010 Tony Award nominations are in and “Fela!” is leading the pack with 11 nominations. We’ve got our fingers crossed for actors Denzel Washington and Viola Davis, nominated for their roles in “Fences,” Sahr Ngaujah and Lilias White, nominated for their roles in “Fela!,” David Alan Grier (“Race”) and Montego Glover  (“Memphis”). [Variety] Zoe Saldana’s dress at the Met’s Costume Institute Gala revealed a new tattoo for the 2010 ESSENCE Black Women in Hollywood Luncheon honoree. [Huffington Post] While the fashion-forward gathered at the Metropolitan Museum of Art in uptown New York, another set of stars came together in Manhattan’s downtown for the Steve Harvey Foundation’s First Annual Gala Benefit, to honor Denzel Washington for his contributions to our youth. The generous actor donated $1 million to Harvey’s organization. See who else came out to show their support. In music news, Usher slammed TV talent shows like “American Idol” saying that they are responsible for the poor state of the music industry. “The true art form of music is being lost, because it seems so easy that everyone can do it,” he told the Guardian. Do you agree with him? [Guardian] And on “The View,” Whoopi Goldberg chimed in on the whole late-night TV Conan O’Brien/Jay Leno debacle, saying she would “pick cotton for $40 million.” — Here’s the full quote: “When it comes to studios and networks, you’re just another peg, and they move you when they want to move you. It doesn’t matter if you’re Jay Leno; it doesn’t matter if you’re Conan O’Brien… but a $40-million peg is not bad. I will pick cotton for $40 million!” Real talk or too much? [AOLBV]