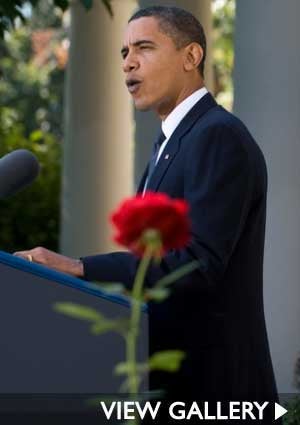 ‘Barack Obama.’ I had read the name in the local papers for weeks and thought nothing of it. But as a newbie TV news anchor in Chicago, the writers and producers knew the critics were watching my every move. So they spelled the name out for me phonetically in the news copy. It rolled across the teleprompter as “BUH-ROCK OH-BOM-AH.” My next thought was whew, I said it correctly. Truth is, that’s about all I remember of that news story except another unusual name ‘Axelrod’ as in David, was also included. It was late 2003, early 2004. So, I would imagine the story referenced Illinois State Senator Obama’s aspiration of becoming a U.S. senator.

Shortly after that, Mr. Obama began dropping by the station to be interviewed for our Sunday morning political news program called City Desk. He seemed a bit thin and appeared to always don the same khaki/greenish dress pants with a dark sports coat. I wasn’t on the political beat. I didn’t meet him then. But as a local news anchor, the invitations to emcee fundraisers, moderate panels and give speeches often put me in the same room with Mr. Obama and his wife Michelle. If you had asked me then, which one would eventually end up becoming President of the United States, I would have said Mrs. Obama. Check her resume.

When people ask me why I’m amazed at what Barack Obama has accomplished, I tell them it’s not because of what most of America and the world sees and knows of his history. It’s because I witnessed what I can only describe as a bizarre turn of events that thrust him into position to even become a U.S. senator. The early Democratic front-runner imploded because of a divorce scandal. Another Democrat ran out of money. Obama suddenly had a clear shot. But, he faced a formidable and very wealthy ivy-league, Republican opponent. And only in a Hollywood-like plot twist, he too dropped out because of a divorce scandal. And if all that wasn’t enough, the keynote address at the Democratic National Convention one month later completely set him up to seal the deal.

It’s at this point in Barack Obama’s story where the masses began to take notice. Consider this, the very same story repeating itself on the national stage during Obama’s run for the presidency. The characters, the challenges, the scandals have different names, but the storyline and the plot are the same. And the moral of the entire thing is that it’s really not about Barack Obama the man. It’s about what he represents for all of us–that anything is possible, even for Black men in the age of President Obama.

Don Lemon is anchor for CNN Newsroom. For more on “Black Men in the Age of President Obama,” log on to CNN.com.