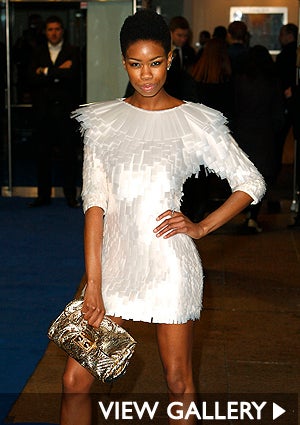 She may not be an instantly recognizable face here in the US, but judging from London-born Nigerian model, DJ and actress Tolula Adeyemi’s rise to ‘It Girl’ status, designer muse and style maven across the pond, it was just a matter of time before Adeyemi would step into our radar. The 26-year-old, who was discovered while shopping at Topshop when she was 17 by a model scout, set tongues wagging when Vivienne Westwood booked Adeyemi for her runway shows and campaigns. She later become Westwood’s muse. Her striking features (those lips!), her edgy modified flat top hairstyle and those towering gams had everyone’s attention. Word has it that actor Dustin Hoffman threatened to leave the set of “Last Chance Harvey” if Adeyemi was not cast in the film. Alas, she was and it marked the start of a new career for Adeyemi. We’ve got a hunch that more Hollywood appearances are to come since Adeyemi spent months living in L.A. this winter. While we wait for her to take over Hollywood, the stylish model has already proven she can work the red carpet like a pro. Never one to disappoint when it comes to glamour, Adeyemi’s over-the-top style is not for those who want to blend in with the crowd. Adeyemi is always outfitted in original ensembles that draw lots of attention and enviable stares. Her style icons say it all: Josephine Baker, Cleopatra, Grace Jones and Billie Holiday. No wonder the paparazzi love shooting her. “My style is quirky glamour, tomboyish. Always a mixture of masculine and feminine shapes,” reveals Adeyemi who credits her mother with influencing her personal style. The contrasts of her masculine hairstyle with her love of very short, sexy 80’s and retro party dresses gives off an androgynous flair that suits her perfectly. You can also catch the fashion risk-taker in boyish shorts and overalls. Adeyemi’s closet, like most models, houses an extensive collection of picture-perfect pieces accumulated over her years working in the fashion industry. Her go-to designers are Alexander McQueen, Miu Miu, Prada and Vivienne Westwood. Adeyemi is always teetering around in major heels to further elongate her killer legs. We noticed she’s got a serious crush on Mulberry bags in all shapes. For those of you learning of Tolula Adeyemi for the first time, let us introduce you to her many off-the-chart fashion moments that has us wishing we not only had her closet but the cojones to rock her distinctive looks. Related stories: