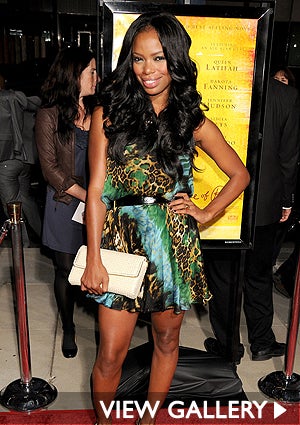 Toni Childs may have earned the mantle of being one of the most feisty, tell-it-like-it-is characters on television, but in real life, actress Jill Marie Jones couldn’t be more different from her breakout role on “Girlfriends.” Whereas Toni was hungry for status and money, Jill is carefree and down-to-earth. Although many of us may have loved her wardrobe of sleek suits and towering stilettos during her run on the show, off the set, her personal style is far from conservative and label-driven. “To me, putting my clothes together is like going to Disneyland. It’s a part of my artistic-creative thing,” says Jones about her eclectic style. The former Dallas Cowboys Cheerleader is adamant about staying true to her quirky and fun approach to fashion, which is why she enjoys dressing herself for events. A self-described fashion novice, Jones is more into style than following trends. “I’ll be honest I can throw out a couple of names but it probably wouldn’t really be accurate. I’m the type of person, I know it when I see it. I don’t necessarily rock what is supposed to be the ‘in color’ or the ‘in look’.” Designers aside, Jones’ closet consists of plenty of sexy frocks that highlight her incredibly fit body, “Mad Men” style pencil skirts, feminine blouses, and hem rising skirts that show off her long gams. Jones also thrives on pushing the sartorial envelope such as the see-through tutu layered over boy shorts she paired with a polished blazer when spotted in West Hollywood with her girlfriends. Playing with contrast is also her forte. Jones pairs ripped denim shorts and a sleek blazer or a super mini-dress with tall, fur-lined boots to shake things up. We love to celebrate individualistic style and Jones possesses the kind of invincible self-confidence that makes everything she wears her very own. Check out Jill Marie Jones’ funky wardrobe and you’ll understand why we are smitten by her style.
Loading the player...